Heating up, Eckert wins $5,000 at Selinsgrove 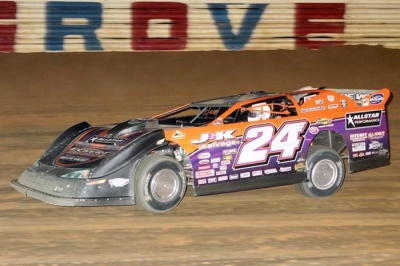 Track champion Jeff Rine of Danville, Pa., a seven-time winner at Selinsgrove in 2012, fought off challenges from Jason Covert of York Haven, Pa., for the second spot. Covert, Dan Stone of Thompson, Pa., and hometown driver Dylan Yoder rounded out the top five finishers at the half-mile oval.

Frye powered into the lead at the start of the 30-lapper, chased by the second-starting Stone and third-starting Rine. In the early laps, a wheel-to-wheel battle unfolded between Stone and Rine for the runner-up position, with Rine securing the spot on the 12th circuit and setting his sites on Frye.

At the midway point of the race, the sixth-starting Eckert advanced to third. On a lap-17 restart, Eckert overtook Rine for the second spot exiting turn two. One lap later, Frye’s car lost power momentarily because of a faulty ignition box, forcing Eckert and Rine to take evasive action on the frontstretch. Eckert took the outside lane around Frye’s faltering race car and the lead entering turn one.

In the final laps, the fourth-starting Covert began to show some speed and moved into the third position. The caution flag unfurled on lap 24 when Frye’s car finally rolled to a stop on the backstretch. On the ensuing restart, Eckert opened up a lead and posted a 1.8-second margin of victory.

Notes: Eckert’s Bloomquist Race Car is powered by a Jay Dickens Racing Engine and sponsored by J&K Salvage, Ritchey Sandblasting and Bahia Service Center. ... Eckert also won the race last year. ... Eckert’s fast time of 18.848 seconds broke Dan Stone’s record of 19.954 seconds. ... Fourteen of 21 starters were running at the finish of the main event. ... Eckert’s fellow WoO regular Kent Robinson of Bloomington, Ind., was in control in the first heat race when his nosepiece folded under, knocked him from contention. ... Derek Byler of Alexandria, Pa., went on to win the first heat despite losing his brakes on the final lap of the prelim. ... In the main event, Byler had brake problems again when a brakeline broke while he was running seventh with four laps remaining.