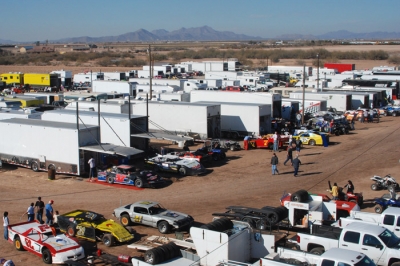 Central Arizona Raceway in Casa Grande is set to host the Wild West Shootout for the first time since 2008. (DirtonDirt.com)

Just a few months ago, the future of winter Late Model racing in Arizona was uncertain at best. But with the recent announcements of planned January miniseries at both the revived Tucson International Raceway and the soon-to-be-reopened Central Arizona Raceway 80 miles north in Casa Grande, that uncertainty has quickly turned to excitement and anticipation for the Southwest’s racers and fans.

“Everybody around here is super excited with all the news coming out,” Tucson driver R.C. Whitwell said of the two six-race miniseries that’ll each be highlighted by unsanctioned Super Late Model racing with open-wheel modifieds on the undercard. “The January races out here are the biggest races of the year, and it was kinda iffy there for a while because we didn’t know what would happen. But now it’s becoming more of a speedweeks-type deal, and it should be a lot bigger and better for everyone.”

Formerly known as USA Raceway, Tucson hosted the Benji Lyons-promoted Wild West Shootout in January of 2010-2012 until Lyons left the track following this year’s WWS drew more than 70 Late Model drivers to the 3/8-mile oval. Renamed and reopened by track owners Pat and Lynn Robley, the track is scheduled to host the inaugural Winter Extreme from Jan. 12-20, while Lyons plans to reopen Central Arizona’s 3/8-mile oval later this season and host the WWS Jan. 4-13.

While the schedules as they stand now include conflicting race dates on Jan. 12 and 13 when Central Arizona wraps up its action and Tucson gets started, the 12 events between the two six-race miniseries presents the most racing that Arizona has ever seen in a two-week stretch. More importantly, the two events continue the growth of Arizona’s winter racing action that has become a popular attraction for both local racers and travelers from all over the country.

“Everybody loves it when all those guys come out here to race,” said Whitwell, a former modified champion at both Tucson and Central Arizona who turned heads with three runner-up finishes during the 2011 Wild West Shootout as a Late Model newcomer. “All the fans get excited and wanna come out and watch, and all the drivers love the opportunity to race against those guys, myself included.

“We don’t get Lucas Oil races or World of Outlaws races out here, so this is the only time of the year you can race with guys like Billy Moyer, Jimmy Mars and Don O’Neal.”

Home-state drivers aren’t the only ones excited about the expansion of off-season racing out West. John Anderson of Omaha, Neb., a longtime patron of Arizona’s winter events, is also pleased with the extra races. He’s especially excited by the prospect of returning to Central Arizona, where he won the final two races of the track’s most recent winter action during the 2008 WWS.

“I won the last two ran there at Casa Grande, so I think it’s awesome,” Anderson said of the high-banked track that’s been shuttered since June 28, 2008. “I think for out there, to help continue to build Late Model racing, I think it’s a great idea. I think it’ll have positive longer-term affects out there if it goes well and it continues to grow.”

While he would rather the two tracks avoid racing against each other, Anderson isn’t too concerned with the conflicting race dates. He even sees it as a potential positive for some race teams.

“Scheduling against each other will probably split up the car counts a bit, which can be good and bad,” Anderson said. “You hope in the future they’ll try to work together on things, but I’d say it probably gives the guys that don’t always win all the time a chance to make some money and a chance to maybe even win one of those nights where there may be a lower car count.”

Choosing which track to attend on the conflicting race dates won’t be a decision made ahead of time for Anderson. It’ll likely depend on how well his week’s going at Central Arizona as to whether he stays for the final two nights of racing or heads for Tucson.

“It’s definitely depending on how well you’re running,” Anderson said. “It’s just kind of a game-time decision of how you’re running at Casa Grande that first week. If things aren’t going so good for you, it might mean picking up and traveling down to Tucson, regrouping and seeing if that changes your luck a bit. But if things are going good, you’ll probably stay there that second weekend.”

The extra racing also means the chance for extra exposure for drivers from the West, a region that hosts a limited amount of racing throughout the year with very little national prominence.

Whitwell knows well what a successful showing in January’s action can lead to. His impressive performance in the 2011 WWS led to an opportunity to move to the Midwest and race for Poplar Bluff, Mo.-based car owner Steve Rushin.

“This gives people like me a great opportunity to show what I might have to offer to bigger teams,” said Whitwell, who drove for Rushin for all of 2011 and part of this season before moving back to Tucson and teaming up with Casa Grande-based car owner Mike Tahtinen. “That’s actually how I got my last ride in the Midwest. I just happened to do good at some of the Tucson races, and he saw me and invited me to go back to the Midwest and race with him. It was a big door-opener, and I got that opportunity just because all them guys come out here to race.

“A lot of the big-name drivers come out here, and if you can run good with them, a lot of people see you and learn your name. If you can get your name out there and run with those guys, you never know who’s watching, it may lead to another opportunity.”

DirtonDirt.com will provide live video coverage from the final four nights of the Winter Extreme at Tucson International Raceway. DirtonDirt.com plans lap-by-lap coverage of Jan. 16’s $3,000-to-win midweek event and three straight events Jan. 18-20 that includes a pair of a $3,000-to-win races and the $10,000-to-win finale. Pricing and details will be announced later.