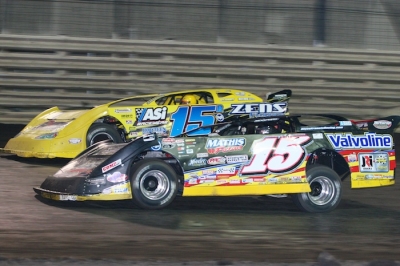 Steve Francis (inside) and Brian Birkhofer (outside) battle for second. (Barry Johnson)

Because of its sweeping corners, manicured lake-bed surface and optimum conditions that allow plenty of racing room, the historic oval known as the Sprint Car Capital of the World doesn’t allow any pretenders to reach victory lane. | Complete Knoxville coverage

Steve Francis of Ashland, Ky., knows it, which made Saturday’s $40,000 victory all the more special.

It stands to reason the inverse is true, as well. “If you miss just anything,” Francis said, "you’re the 10th-place car.”

Scott Bloomquist knows what it’s like to reach victory lane at Knoxville as the event’s only two-time winner, but he knew his pole starting spot in the 33-car field was no guarantee. He struggled with an ill-handling car and ran fourth, leading 10 laps early but never being much of a factor.

“You can’t be off any here,” Bloomquist said. "Somebody’s going to hit it. ... just like Jimmy (Owens) was running away last year, and he struggled too, tonight. Brady (Smith) looked like he had it under control. It’s just this place is not very forgiving. You’ve gotta be on the money and we were just off a little tonight.”

Through the middle stages of Knoxville’s 100-lapper, 2007 winner Brady Smith of Solon Springs, Wis., appeared to be unbeatable. After taking the lead on the 13th lap, he fought off a challenge from Brian Birkhofer on a restart, then built leads of as much as a straightaway while cruising into the second half of the race.

“The first however long, those cautions kept coming up, so I’d look up there (at the scoreboard) and I kept telling myself ‘Don’t even look up there and see how many laps are left. Just do your job and hit your marks.' I hate looking at the lap counter,” Smith said. "I just tried not to think about it, just to focus on my job and do the best I could.”

Smith pulled away once again after the final caution on lap 60, but after a half-dozen laps, his lead began shrinking as Francis began reeling him in. Smith struggled with a lapped car, awkwardly banged the turn-four cushion and lost the lead as Francis went underneath.

Suddenly Francis had the strongest car and Smith simply couldn’t keep up over the final 30 lap. He suspected earlier contact with another car that caused damage to his No. 2 Bloomquist Race Car didn’t help.

“I don’t know that it cost us the race,” Smith said. "At these speeds, aerodynamics are very important, and our quarterpanel was all wadded up.”

While Francis and third-place finisher Brian Birkhofer answered questions at the postrace press conference, Smith pondered what might’ve been.

“I’m just disappointed,” said Smith, who entered the Knoxville weekend with five victories in his previous six feature starts. "It’s a big difference from first to second. I race for a living and I’m thinking about the money and the prestige of winning the race.

"Again, I’m not ashamed to finish second. This is a phenomenal field of cars. I just wanted to win bad, that’s all. It’s just natural to be disappointed. We were in the lead ... I’m a proud guy. I hate to give up first when we’re there.”

“I think the last two years, me and Brian have probably run 150 laps side-by-side here counting last year and this year, and I don’t think we’ve put a mark on each other yet, and raced like hell,” Francis said.

Added Birkhofer: “Me and him raced a lot. I threw everything but the kitchen sink at my car this weekend, and I’d have done that if I had that in the trailer.”

Birkhofer started seventh and nosed into the lead on the 26th lap for a single circuit ahead of Brady Smith, but when he started running out of options, he threw caution to the wind and tried running the high side.

"I looked at that cushion a couple of times and said, ‘Well, let’s go up there and try it.’ I’m not much of cushion guy. I had fun up there, actually,” Birkhofer said. “I thought the guardrail was going to take the sailpanel (off) ... I kind of got scared after a while and just came down and started racing in the middle of the racetrack.

“When have you ever seen me run on a cushion like that? Now if (Don) O’Neal was driving the car, maybe ... I don’t think (Francis) was worried about it.”

Don O’Neal of Martinsville, Ind., owns a series-leading 11 Lucas Oil Late Model Dirt Series victories, for on the opening two nights of the Knoxville weekend, he was barely an also-ran. Driving a brand new MasterSbilt for Moring Motorsports, the Illinois-based team that occasionally fields cars for O’Neal, the No. 71 failed to make the lineup for either preliminary feature.

Last year’s Knoxville winner was good enough in Saturday’s B-main to transfer to the 100-lap finale, and finally O’Neal started looking like the driver who is second in Lucas Oil Series points.

“We’ve struggled all weekend,” O’Neal said. "We’ve changed so much stuff. We just put the same feature setup on it that we had last year, which was good, but it was the qualifying and heat race stuff that we couldn’t find a happy medium with it.”

Starting 29th, O’Neal broke into the top 10 by lap 45, then clicked off a few more spots to notch a seventh-place finish. With Knoxville’s lucrative purse, that paid $6,500 and salvaged the weekend.

“The biggest thing is I was afraid of getting hung up in that traffic and getting a lap down early,” O’Neal said. "The cautions fell right and kept that from happening. A hundred laps here, you’ve just sort of gotta be patient and just get ‘em as they come. A few times in the race, we were real good, at other times it was like it would come and go.”

O’Neal was able to avoid trouble and advance 22 positions in the final rundown.

“You just run in and make a mistake and you just lose so much ground, it just takes forever to make it back up here when it’s as slick as it was,” he said. "The top just really never seemed like it had much there all night, you know. I was sort of hoping there’d be a little more there where you could get up on the wheel and make something happen. It just wasn’t there to happen.”

With two of Tennessee’s — and the sport’s — best starting on the front row at Knoxville, some fans might’ve thought they were ready to see a Scott Bloomquist-Jimmy Owens showdown over 100 laps.

It turns out that showdown lasted just a few laps with Owens leading two laps before fading out of the top five, and Bloomquist giving up the lead to Brady Smith on the 13th lap and never being a factor again. While they maintained for top-five finishes, the handling on the cars of Bloomquist and Owens held them back,

“You know, it was really odd, because the car fired off when they dropped the green. The car felt really good, and then I picked up a push,” Bloomquist said. "And the push just got worse. The longer I ran, it just got too tight. We couldn’t throttle up across the center (of the corner) like I needed to to carry the momentum to be able to run. We ran a long green there once, and it got better.

“All four of us came together when we got in traffic that time, and the car started turning and I thought we were going to have a shot at it again. Then when the caution came out, it would not steer again.”

Owens concluded he simply had “the fifth-best car” as continued struggles on restarts left him vainly trying to keep up.

"I was just real skaty. I didn’t have the sidebite we needed. Fifth was about the best we could do, I guess,” he said.

“Actually, the restarts, it was really hard for me to hang on. It took me about five laps to get going, and after that, I was able to go back out and I felt like I could be faster than the guys in front of me a few times, but it was kind of hit and miss. I’m sure we were all running about the same average lap times. You know, tonight was Francis’s night. Congratulations to him. He did a great job, and Brady ran good. A top-five finish? We’ll take it.”

Mike Marlar of Winfield, Tenn., winner of Friday’s $7,000 preliminary feature at Knoxville, started sixth in Saturday’s finale and at one point appeared to be a contender.

Marlar ran as high as third early in the race and held the fourth spot near the race’s midpoint before a couple of scrapes with Scott Bloomquist. The first came on a lap-45 restart when Marlar was forced low on the frontstretch and was shuffled back to seventh. Then just past the halfway point Marlar was caught underneath Bloomquist again entering turn one, sending Marlar skittering up the track and dropping him out of the top five for good.

"The closer I got to the front — when I got to fourth, I felt like I was catching the leaders and I had a really good car,” Marlar said. “We had that restart and Scott ran me clean through the infield and just got my rhythm all out, and it seemed like there was three or four guys that passed me when that happened. ... It was so slippery, that if a guy crossed your path in front of you, it was just take your nose and cut your speed way down.”

Marlar ended up a respectable sixth and pocketed another $7,000, but he felt it could’ve been better had things fallen his way.

“It just got my rhythm out,” Marlar said. “When you’re midpack, it’s hard to go. When you get up toward the front and have got clean air, your car works way better.”