Lathroum bags another $7,000 at Big Kahuna 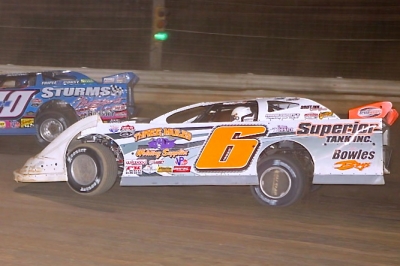 MARKLEYSBURG, Pa. (Sept. 29) — Jamie Lathrom has taken some big money out of Roaring Knob Motorsports Complex in the month of September.

Lathrom, the Mechanicsville, Md., driver who earned $5,000 for winning the 3/8-mile oval’s King of the Knob event earlier this month, added another $7,000 to his bank account Saturday night by using a late pass to top Chuck Harper of Beverly, W.Va., in the Three State Flyers-sanctioned Big Kahuna. | Slideshow

Three State Flyers points leader Gregg Satterlee of Rochester Mills, Pa., also moved by Harper late in the race to score the runner-up finish while Harper settled for third ahead of Jason Covert of York Have, Pa., and Kenny Pettyjohn of Milton, Del.

Starting from the outside of the front row, Harper shot into the lead the on start the 60-lap event and held off Lathrom’s early challenges.

Three cautions slowed the pace during the first 20 laps of the race, but Harper was sharp on each restart to remain ahead of Lathrom.

The final 40 laps ran nonstop with the leader meeting lapped traffic around lap 35. Harper worked his way through as he continued to hold the lead with Lathrom and Satterlee right behind him.

Advancing from his 20th starting spot, Covert was on the move and took fourth on lap 31. Covert was able to close the gap and make it a four-car fight for the lead.

Harper kept the lead as the laps began to wind down, running a high line with Lathrom right behind. As the leaders exited turn two on lap 57, Harper encountered a lapped car and had nowhere to go as Lathrom pulled up along side of him.

Lathrom made good of the opportunity, taking the spot from Harper and holding off Satterlee in the race’s final three laps.