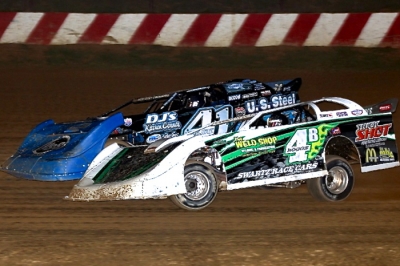 Jackie Boggs (4) heads for victory in the first 50-lapper. (rdwphotos.smugmug.com)

Boggs earned $10,000 for his victory in the opening 50-lap feature, while Clanton picked up a new Harley Davidson motorcycle as a trophy for his 15th-to-first run in the second 50-lapper. | Prelims | Video | Slideshow

Moving by Steve Casebolt of Richmond, Ind., midway through the first feature, the seventh-starting Boggs dominated the second half of the race, cruising for much of the distance before successfully negotiating heavy lapped traffic in the race’s closing laps. He crossed the finish line with a comfortable margin over Linville.

“This is a young man’s racetrack," said Boggs, who survived a heavy and fast surface to claim the victory. "This fast and this wide open, it just keeps you throw’d over in the seat.”

Starting from the pole after a complete inversion of the first race’s final running order, Wayne Chinn of Bradford, Ohio, grabbed the lead on the start of the second feature and held the top spot until Ben Adkins moved by on lap eight.

Clanton rallied from his 15th starting spot to break into the top five just after the halfway and benefitted from a turn-two tangle between third- and fourth-running Wayne Chinn and Tim Dohm to move up to third for a restart with eights lap remaining.

Clanton quickly cleared Greg Oliver of Jackson, Ohio, for second once the race resumed and took just two more laps to run down Adkins. Clanton made the winning pass one lap later, edging ahead at the completion of lap 45 before pulling away in the final laps.

“We went a little hard on tires and was just biding our time,” Clanton said. "We were waiting on the caution to come and get us bunched back up, and it fell at the right time.”

With the option of taking the Harley or a $10,000, Clanton initially choose the money before changing his mind later and picking the motorcycle.

“We just got to thinking about what the tradition is," Clanton said of his decision to take the motorcycle. "It’s pretty neat that they give a Harley away versus the money, so we decided to go up there and take the Harley instead of the money.”

While Clanton cruised to the victory, Oliver moved by Adkins in the closing laps to claim the runner-up finish.