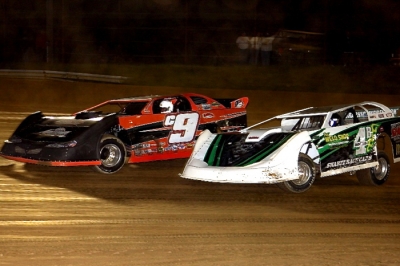 Steve Casebolt (9) turns back a challenge from Jackie Boggs in the third heat race. (Roy Walker)

PEEBLES, Ohio (Sept. 28) — Dustin Linville of Bryantsville, Ky., kicked off the two-night One Epic Weekend event at Brushcreek Motorsports with a dominating performance during Friday night’s preliminary action that set the lineup for the first of two $10,000-to-win main events slated for Saturday night the third-mile oval. | Slideshow | Video

In an event that drew 41 Super Late Models, Linville dominated the first of four heat races for the unsanctioned event, joining Chad Smith of Miamisburg, Ohio, Steve Casebolt of Richmond, Ind., and Delmas Conely of Wheelersburg, Ohio in winning the eight-lap preliminary races.

Action continues at Brushcreek Saturday, where the winner of the second main event will have the option of taking home the $10,000 paycheck or a new Harley Davidson Motorcycle.

Moving to the lead from his pole-starting spot, Linville ran unchallenged through the first heat race, pulling to nearly a straightaway advantage by the end of the caution-free eight-lapper.

Third-staring Josh McGuire of Grayson, Ky., overtook outside polesitter Greg Oliver of Jackson, Ohio, on the opening lap, but couldn’t keep up with Linville in settling for the runner-up finish. Ben Adkins of Portsmouth, Ohio, finished third followed by Oliver in a race that transferred the top four finishers directly into Saturday night’s first main event.

“This is really the second time we’ve been up here with this car, and It was really good,” Linville said. “We had a little bad luck the first time we were up here, but tonight the car was really good. We’ll take that into tomorrow night and see what that does.”

Much like Linville in the first heat, Smith moved to the lead on the start of the second heat race and dominated the caution-free prelim for a convincing flag-to-flag victory.

Outside polesitter James Jameson of Lawrenceburg, Ind., took second, nearly a straightaway behind Smith at the finish while Jared Miley of South Park, Pa., and Doug Drown of Wooster, Ohio, claimed the race’s other transfer spots.

“We were able to learn from last night a couple things like how the track would change conditions,” Smith said. “We thought today that the track would’ve been a little tackier and quicker, but from practice to heat race we were able to make the proper the adjustments and really go out there and put on a good show.”

The polesitting Casebolt outdueled fellow front-row starter Jackie Boggs of Grayson, Ky., on the opening lap of the third heat and got some breathing room when Boggs nearly went over the backstretch banking on the next lap. Boggs corrected his car without loosing the second spot, but was unable to makeup the ground he lost to Casebolt in the caution-free race.

Casebolt crossed the finish line a few car lengths ahead of Boggs while Jacob Hawkins of Fairmont, W.Va., advanced from fifth to finish third with Shane Clanton of Fayetteville, Ga., claiming the fourth and final transfer spot.

“The car was really good,” Casebolt said. “We had a tough heat with Jackie Boggs and Shane Clanton and a couple of other good guys out there. The car felt extremely well. We’re looing forward to having a good chance of winning that Harley.”

Conley pulled ahead on the start of the fourth and final heat race while a side-by-side battle between second- and third-starting Brandon Sheppard and Eddie Carrier Jr. allowed Conley to pull away to a comfortable advantage.

Conley paced the entire distance of the caution-free race, while Sheppard topped Carrier by less than a car length to win the race-long battle for the runner-up finish. Carrier settled for third with Dave Hess Jr. of Waterford, Pa., earning the final transfer.

“I thought I heard some motors back there, but you just run your car as hard as you can because these guys don’t cut you no slack,” Conley said of the side-by-side battle behind him. “Hopefully we’ll have a little better car than what we had tonight.”