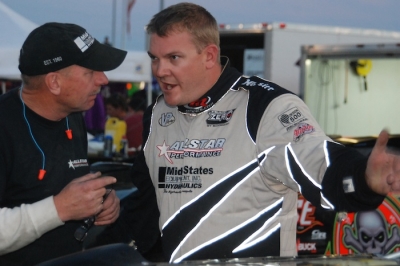 KNOXVILLE, Iowa (Sept. 27) — Even on the healthy-sized half-mile oval of Knoxville Raceway, laps can click off pretty quickly. So quickly that the 25-lap semifeatures on Thursday and Friday don’t always allow drivers to charge from the back. | Complete Knoxville coverage

Brady Smith, the 2007 Knoxville winner, found that out when he tried to rally from his 11th-row starting spot in the 24-car field Thursday night. He made up a lot of ground, but he finished more than a half-track behind winner Billy Moyer.

Still, the 35-year-old Solon Springs, Wis., driver logged a seventh-place finish that kept him in the conversation of drivers to keep an eye on during the three-race weekend that wraps up with Saturday’s $40,000-to-win finale on the Lucas Oil Late Model Dirt Series.

“The feature we were definitely good,” Smith said. "I’d have loved to see the race be about five laps longer. It was fun.”

On a night when the track dropped off in qualifying and heat races didn’t allow quite as much passing as usual, Smith and others found themselves forced to depend on consolation races to even make the main event. Smith won the B-main, but that put him 21st in the 24-car starting field.

“Had we transferred through our heat, we’d have started much further forward,” Smith said. “Typically the heat races here, I’ve never had a problem moving. But the invert tonight, if you didn’t have a few breaks with cautions and stuff, it got pretty spread out.”

But Smith, who entered the race with five victory in his last six starts in WISSOTA competition, never gave up on his Bloomquist Race Car.

“We made some changes,” he said. "We were changing stuff all night and we just really feel like for that condition, we’ve got a pretty good setup.”

Clock is unkind to Mars

Jimmy Mars of Menomonie, Wis., logged a fifth-place finish in Thursday’s semifeature, but even at the end of the night, he couldn’t shake the memory of his 33rd-quickest qualifying lap that made his work more difficult.

“It ended better than it started,” Mars summarized the night. “I heat race good. I feature race all right. Qualifying sucks.”

While Mars, one of only three drivers to compete in every Knoxville Nationals, has likely secured a spot in Saturday’s 30-car finale, he’d still like to qualify better Friday to give him a chance to improve that position.

“I think we’re fine ... if we’re in the show for the feature, the main event. I’d say a top five should make me get in it for sure. But we’ll just have to see how the whole points deal lines up, because I stink at qualifying here right now,” he said. “Hopefully tomorrow night I can be a little better for qualifying.”

Mars isn’t sure what the hangup is in racing against the clock.

“I don’t know what I do wrong, but I’ve gotta be better at qualifying,” he said. "I know I screwed up on a couple of things tonight for qualifying, and I was mad at myself, and there ain’t nothing I can do about it except keep moving forward. I don’t know. That’s my main thing — I screw up qualifying.”

For most of the past 15 season, Billy Moyer and Shannon Babb have been battling door-to-door on the racetrack. While racing as members of the vaunted Petroff Posse. Racing while Babb was running a car owned by Moyer’s father. And battling as the two winningest UMP DIRTcar Summernationals drivers in series history.

So it was again Thursday at Knoxville as they were running 1-2 in the early laps after dispatching of early leader Tyler Reddick. As it turns out, Moyer only allowed Babb a few circuits out front before he took over and ran away with the 25-lap semifeature victory.

When Moyer was asked at the postrace press conference about enjoying their battles, Babb cut in: “He likes beating me.”

Moyer laughed, then added: “I know Shannon’s always going to be tough. We have fun. We respect one another and run each other clean, or try to. We’re going to slide each other a little bit, but hopefully we slide and clear each other, but that’s fun and part of it.”

Good enough to waltz away with the $7,000 payday. Babb appeared like he’d lose the second spot with about 10 laps remaining, but he found a faster away around the track in the top groove to pull away from Steve Francis and Brian Birkhofer in the final laps.

“This place has real wide corners, so you can change the way your car pushes or gets loose on you by the way you pick up the fuel,” Babb said. "I was just trying to hunt around a little bit. I was watching (Moyer) — maybe that was disturbing my driving style for a while — but I picked a different lane there towards the end and I think my car rolling a little bit better there.”