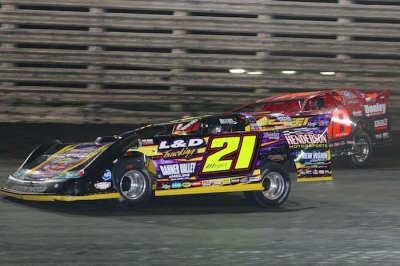 KNOXVILLE, Iowa (Sept. 27) — Iowa native Billy Moyer slid under protege Shannon Babb in turn four on the eighth lap and led the rest of the 25-lapper on the opening night of the Lucas Oil Late Model Knoxville Nationals.

Moyer, who had nearly a straightaway lead by the halfway point at the track where he swept all three features in 2010, earned $7,000 for the victory on the first of three nights of action. Another preliminary night is scheduled for Friday with the $40,000-to-win finale set for Saturday night, the lineup based on prelminary finishes. | Complete Knoxville coverage

Moyer, the Hall of Famer who has raced most of his career out of Batesville, Ark., will surely be among the top contenders Saturday after his dominating performance as he ran unchallenged the final 15 laps in taking the checkers at the half-mile sprint car stronghold.

Far behind Moyer, a tight battle for second raged over the final 10 laps with the high-running Babb turning back challenges from the No. 15s of Steve Francis and Brian Birkhofer to keep the runner-up spot.

The sixth-starting Francis got third with fellow third-row starter Birkhofer in fourth. Jimmy Mars rounded out the top five finishers.

Outside front-row Tyler Reddick jumped out to the early lead, swinging around polesitter Denny Eckrich exiting turn four on the first lap. Babb and Moyer took up the chase, getting past Eckrich and stalking the leader before Babb slid underneath Reddick on the sixth lap to grab the lead.

But after the race’s lone caution flew on the sixth lap when Austin Hubbard rolled to a stop in turn four, Moyer quickly went to work on Babb and took command.

Outside front-row starter Brady Smith led all the way in the B-Main, topping polesitter Jason Feger. Chris Simpson and Terry Phillips joined them in transferring to the main event in a four-car breakaway. Donnie Moran, Eric Well and Jimmy Owens were next in the running order in the prelim slowed by a single caution.

John Blankenship lost a heat race victory dealing with lapped traffic, but he was trying to play it conservative in the 12-lapper. “This is just a preliminary night. I didn’t want to junk our stuff,” he said. ... Chad Simpson was undone by heat race woes; he broke a rod in his powerplant to end his night. ... Nick Marolf lost a cylinder in the heat race but was able to run the D-Main. ... Will Vaught’s team scrambled to make fuel pump repairs before his consolation. ... Jimmy Mars edged Bub McCool on the last lap of his heat race. “I passed ‘em, and they they had that caution and that just screwed me up,” Mars said. "He took my line away and I had to try some other lines out there.” ... Kent Robinson came from 10th to fourth in his heat race to transfer to the feature. “Now I’ve just gotta stay on top of it and make the right decisions to go good in the feature.” ... Matt Furman found himself on the pole position for the first heat after the 10-car inversion, but he drove a solid race in finishing second to Brian Birkhofer. He had trouble handling the car, though. “It felt like it — or there needs to be a better driver behind the wheel. It was a handful, quite a handful,” said the Iowa native who now lives in Columbus, Ohio. "To get it around the bottom, I knew I had to hold tight, and I was going to make them work to go around the outside of me."

Seventh-starting Tyler Reddick went around Mike Fryer for a midway pass for the lead, then held on for a victory in the final heat race. FIfth-starting Denny Eckrich kept Reddick within his sites and made a late charge to get close, but couldn't make the pass in settling for second. Polesitter Tim Isenberg was third followed by Fryer, the final driver transferring to the main event. Mark Burgtorf nearly got around Fryer heading to the checkers but couldn't find a way past in the caution-free prelim.

Seventh-starting Billy Moyer, up to third by a third-lap yellow, swept around leader Ray Guss Jr. on the restart and cruised to victory in the fourth heat. Brian Shirley also dispatched of Guss and ran a distant second to Moyer the rest of the way. Guss fought off challenges from Rob Moss to hold on to third while Moss lost the final transfer spot to 10th-starting Kent Robinson on the last lap. Moss was fifth and 12th-starting Ryan Unzicker sixth. Will Vaught slowed on the third lap to draw the first of two yellows. Chad Simpson dropped out midway through the race for another caution.

Working Bub McCool most of the race, Jimmy Mars made the winning pass exiting turn four on the final lap to capture the third heat. McCool finished a close second to transfer to the main event along with polesitter Morgan Bagley and Steve Francis, who rallied from his 10th starting spot. Chris Simpson came from 11th to finish fifth. Tyler Bruening spun off turn four on the third lap to draw the prelim's lone caution. Jay Johnson started outside the front row, but he fell from contention on the first lap when he scraped the guardrail in turns three and four.

Taking advantage of polesitter John Blankenship's trouble with the lapped car of Alonzo Grossse, Jesse Stovall took the lead on the ninth lap en route to winning the second heat. Blankenship was in control until he got too high between turns three and four while dealing with Grosse, and the third-starting Stovall swept underneath. Outside front-row starter Austin Hubbard also took advantage to get the second spot. Blankenship held on to third ahead of eighth-starting Shannon Babb, the final car transferring to the main event from the caution-free prelim.

Eighth-starting Brian Birknofer went around fellow Iowa native and polesitter Matt Furman after a lap-10 restart and led the final two circuits. Furman held on to finish second ahead of 10th-starting Scott Bloomquist, while Terry Casey got the fourth and final transfer spot. Earl Pearson Jr. was battling Casey for second when he slowed, the rear of his car sagging as he headed for the pits. An early caution flew when Jill George backed in to the backstretch wall.

Bloomquist, a two-time series champion, tripped the clock at 17.277 seconds at the half-mile oval on the first of two preliminary nights for the Lucas Oil Late Model Dirt Series event.

Rich Bell of Sheffield, Ill., was the surprising second-quick qualifier (17.476) while Dennis Erb Jr., Kent Robinson and Mike Marlar rounded out the top five. They’ll start outside the fifth row in each of five heat races with the track’s 10-car inversion.

The first night of prelims will be capped by a $7,000-to-win semifeature. ... The 80 cars is the second most in the history of the race that limited entries to 66 cars from 2005-’11. ... The night’s action includes time trials, five heat races, a C-Main, B-Main and 25-lap A-Main. Drivers accrue points through Thursday’s action (and again Friday) that helps set the lineup for Saturday’s 100-lap feature. ... The top four finishers of heats transfer to the main, finishers 5-8 to the B-Main, the rest to the C-Main. ... Wondering about the format? Check out our format guide. ... Chris Simpson had problems in hot laps and slowed immediately in front of Jay Johnson, who suffered damage to the front of his car when he struck Simpson's machine. ... Chad Simpson's team had to make a mid-morning hauler switch. His regular hauler broke an axle as he pulled out of the driveway, so he borrowed one from fellow Iowa driver Mike Klinkkammer, swapping over his tires and some of his tools. ... Bobby Pierce is making his first Knoxville visit.