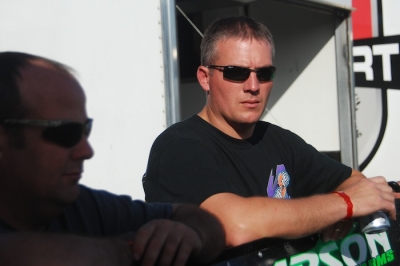 KNOXVILLE, Iowa (Sept. 27) — The last time Chad Simpson hit the racetrack, he was mixing it up among the leaders in Dirt Late Model racing’s biggest event at the World 100.

And while the race at Eldora Speedway didn’t end well for the 33-year-old driver from Mount Vernon, Iowa — a broken axle and rear-end problems knocked him out of the race in the final 10 laps — he’ll get another chance against the sport’s best this weekend at Knoxville Raceway. The Lucas Oil Late Model Dirt Series-sanctioned Knoxville Nationals includes three nights of action with the grand finale paying $40,000 to the winner out of a whopping purse of more than $262,000. | Complete Knoxville coverage

Simpson’s team put his No. 25 back together and they’re ready to tackle the big half-mile oval that’s a long-time sprint car stronghold but has hosted this major Late Model special for the past nine seasons.

“We pulled the rear end out, and took our time, went through it and made sure everything to put back the way it needed to be,” said Simpson, adding the World 100 run — where he led 30 laps early in the event — was a confidence booster.

“Absolutely,” Simpson said. But he knows that’s no guarantee of success. "You can have good runs and come out the next week and run horrible. We came here with the same car and same setup, and I think we’ll be all right.”

Simpson’s best finish in four feature starts at Knoxville came with a ninth-place run in 2009. Last season his race ended early when he tangled with brother Chris on the backstretch.

While he has a single top-10 run in the Knoxville’s main event, Simpson says Knoxville is a track he enjoys running.

“I like the big half-mile tracks,” he said. "You know, we grew up at West Liberty, Farley, racing those tracks, those big half-miles and stuff. Any time we can get on these bigger tracks I really like it. Eldora’s a big racetrack, too. It’s kind of what I’m used to around here, I guess, and more apt to racing at.”

While some race teams start each season with a new race car and stay on that pace, others go to new equipment when they get a chance to sell their current cars. And that’s why Mike Marlar, crew chief Josh Davis and the Bryson Motorsports team find themselves debuting a new car in late September.

When Georgia driver Frank Ingram showed interest in buying one of the Norman Bryson-owned Rockets, Marlar and Co. put in a quick request to Rocket Chassis for a new car, and quickly the wheels were in motion. The Shinnston, W.Va., chassis manufacturer had the frame ready two weeks ago today, the car was powder-coated and ready for more work four days later, and Marlar and Davis put the final touches it a few days later.

Marlar, of Winfield, Tenn., drove an older, but similar, Rocket to a fourth-place finish Saturday at Brownstown (Ind.) Speedway, and now he’s ready to debut the new car at Knoxville.

“We tried to build a better car than we had,” said the 34-year-old Marlar, who said the biggest changes came in distributing weight different. “I’m not really 100 percent confident, but unless we really screwed something up, it should go.”

Watching the Rocket Chassis crew whip the car into shape impressed Marlar, especially co-founder Steve Baker, who went from working behind to a desk to installing the deck on the car to waiting on incoming customers, Marlar said.

“They can get some stuff done,” he said.

Brady Smith, whose richest career victory came at Knoxville in ’07, has won five of his last six feature starts. So the Solon Springs, Wis., driver is bringing one of the hottest cars in the country to the historic half-mile oval, right?

Smith, 35, splits his racing between open-competition engine events, like the Lucas Oil-sanctioned race at Knoxville, and WISSOTA-sanctioned events with a limited powerplant. And because those previous victories came in his WISSOTA car, he’s piloting a race car at Knoxville that he hasn’t driven since early August.

It’s a 2012 Bloomquist Race Car that isn’t completely foreign to Smith compared to the other Bloomquist machine he won with over the past month at Ogilvie, Minn., Proctor Minn., Hibbing, Minn., Grand Forks, N.D., and New Richmond, Wis. — victories that paid more than $26,000 in purse money.

In fact, the car he’s driving at Knoxville was formerly his WISSOTA-engine car, and despite being shelved the past six weeks, it was a winner it’s last two times out. Smith is confident he can steer it around Knoxville successfully.

“Every car’s got a little different characteristics,” Smith said, “but they are very similar.”

“This place it kind of a beast of it’s own with driving setups,” Smith said.

The weather is beautiful at Knoxville with a weekend forecast of highs in the 70s and lows around 50. ... Thursday’s complete program, topped by a $7,000-to-win semifeature, allows drivers to accrue points throughout the night for a system that sets the lineup for Saturday’s 30-car finale, which pays $40,000-to-win. ... It appears Knoxville might draw the most entries in history since drawing 97 in the first event in ’04; starting in ’05, there was a 66-car cap on cars that was lifted this season. ... The weekend is Late Models only with no support class. ... Among entries making their first Lucas Oil Series starts: Steve Lance Jr. of Cuba, Ill., and Ray Guss Jr. of Milan, Ill., the reigning IMCA weekly champion making a rare open-motor start.