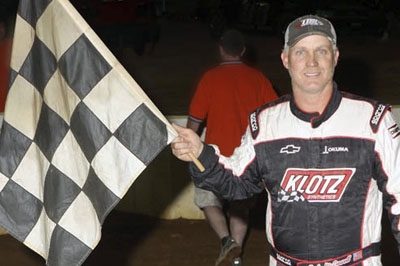 Doing it all in a new race car made the impressive feat even sweeter for the 46-year-old McDowell.

“We’ve actually won in new cars before, and it makes it awful nice when you do that,” said McDowell, who added to his already impressive 2012 stats with his seventh and eighth victories of the season. “That was a really good weekend for us all around. To get it done in a new car, I guess that makes it even a little better.”

McDowell wasn’t surprised at all by his successful debut. With setup help from chassis builders Keith and Tader Masters and confidence based on the success of MasterSbilt house car driver Don O’Neal and other MasterSbilt drivers, McDowell expected his new car to run well.

“Keith and Tader Masters worked with us really well when we were putting the car together,” McDowell said. “Their success with their guys that they already have out there and what they’ve got with Don O’Neal, it made it a little bit easier on our part as far as having information and stuff to go off of. That was a credit to their cars and what they build and their knowledge and what they’ve got going on there.”

McDowell has had experience in MasterSbilt in the past. In fact, he’s driven quite a few of the major chassis brands throughout his nearly 30-year driving career. McDowell, who says he still plans to drive the Warrior Race Car he previously ran in select events, believes having experience in different chassis brands helps his program.

“We’ve actually raced just about everything over the years, and I think that helps when you’re familiar in different stuff and know how to make the cars work,” McDowell said. “It’s good to jump in something and have success. I think it shows we’re pretty good at adapting.”

The experience in different chassis brands also helps McDowell in the driving and setup school he operates with brother and crew chief Shane McDowell and fellow racer Ray Cook of Brasstown, N.C. Since moving from Clint Bowyer Racing to Team Dillon Racing after the 2011 season, McDowell has stepped away from national touring on a full-time basis and focused more on his driving school.

With more focus on instructing others, McDowell has placed a heavier importance on be able to relate to his students. Having experience in multiple chassis brands allows him to do just that.

“With what we do with the driving school and stuff like that, we just need to be able to be technically knowledgeable about a lot of the chassis manufacturers and what’s going on with those,” said McDowell, who also plans to soon add a Rocket Chassis to his arsenal. “I’m sure we’ll be running the MasterSbilt some and I’m sure we’ll still run the Warrior a lot. We’re putting a Rocket together for somebody and we’ll probably run it some, too.”

The chassis changes and the new focus on his driving school have required an adjustment for McDowell, but he seems to have adapted well.

“It’s been an adjustment for all of us, mixing in some more of the school stuff and some of the other stuff we’re doing, but all-in-all, it’s been a good year for us,” McDowell said. “It’s different than what we’ve done in the past, but it’s working out well.”

“We’ve actually raced just about everything over the years, and I think that helps when you’re familiar in different stuff and know how to make the cars work.”