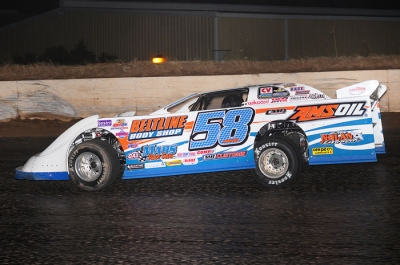 Diemel swept past Jake Redetzke of Eau Claire, Wis., on the sixth lap, then pulled away from the field for his third victory in Red Cedar’s popular season-ending event. Hometown driver Jimmy Mars, the winner’s teammate, finished second followed by the pole-starting Redetzke. Nick Anvelink of Navarino and Lance Matthees of Winona, Minn., rounded out the top five in the 18-car field. | Slideshow

Redetzke took the early lead as he edged past Anvelink down the backchute on the first lap. Meanwhile, Diemel, who started on the outside row two, quickly moved up the track to build up his momentum and drove past Mars and Anvelink on his way to the front.

Redetzke built a five-length lead early, but once Diemel was clear from traffic, he quickly closed in on the leader. Using a power move, Diemel swept past Redetzke on the high side down the backstretch to take command. Once in front, Diemel quickly put distance on the field as the battle now focused on the second spot.

Mars picked up the pace after a few laps and took third from Anvelink, then gradually began to close on Redetzke for second. Meanwhile, Diemel had caught the back of the pack and was starting to lap slower cars.

Mars moved up on Redetzke and as the field took the halfway signal, then took the spot. However, Mars was a straightaway behind Diemel, who gave no indication that he was going to back off on his frantic pace.

Track champion Scott Gilberts and Mike Prochnow were locked in a good battle for fourth until Gilberts got hung up in traffic and lost a number of positions. Gilberts was actually forced off the inside of the track before he was able to disengage himself from a slow running car.

Diemel had a little trouble with the traffic also, nearly running up the back end of one car and also nearly catching the wall off turn four, but he refused to back off and was finally found more clear racetrack. Through all Diemel’s adventures, Mars couldn’t make up any ground.

Diemel continued his rapid pace, lapping up to the ninth-finishing Gilberts by the time he hit the checkers in the caution-free affair.