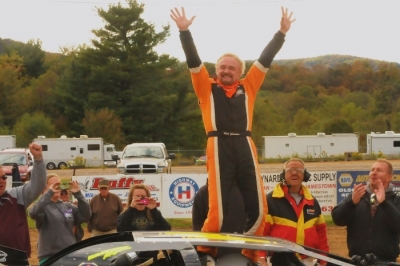 Gardner’s victory in the Jim Duffy Memorial marked his first on the ULMS circuit and his first in more than 20 years at McKean County Raceway. | Slideshow

Brent Rhebergen and Horton paced the 24-car field to green with Horton getting shuffled back to third early behind Rhebergen and Gardner.

After a caution for Bob Close and Greg Oakes, Rhebergen got the jump on Gardner while King, Thursday night’s King of the Hill winner, slipped into third before a yellow flag appeared for Doug Eck in turn three.

With Rhebergen still out front, King dropped Gardner to third on the restart, but Gardner regained the spot by the fifth lap as Barton worked his way into the top five. Horton was back up to third on the seventh lap.

Rhebergen’s early dominance ended on the 10th circuit when he tangled with the slower car of Scott LeBarron, knocking him from contention and handing the lead to Gardner.

Gardner refired on the restart with King, Horton, Barton and Frye giving chase. Gardner built a half-straightaway lead with 10 laps remaining while Horton and King dueled for the second spot.

Gardner cruised the rest of the way for the victory in a race postponed Friday by rain.

Notes: Gardner’s No. 1 is sponsored by Dunlap Towing and Tobber Racing. ... Max Blair won the afternoon's Fastrak Northeast feature for Crate Late Models. ... ULMS and McKean County officials are expected to announce the makeup date for the the $13,000-to-win Priority Care RaceFan 50 this week. The event was the centerpiece of the rain-plagued Fall Classic weekend rained out on Saturday.