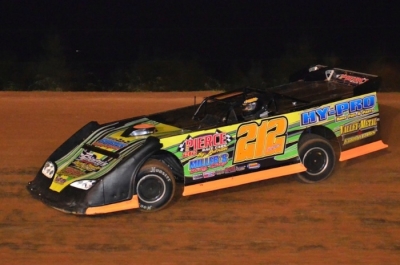 Josh Putnam heads for victory at Thunderhill. He earned $3,000. (photobyconnie.com)

SUMMERTOWN, Tenn. (Sept. 22) — Pole-starting Josh Putnam of Florence, Ala., led all 40 laps Saturday at Thunderhill Raceway for a $3,000 victory in the unsanctioned Topless Brawl II.

Seth McCormack of Muscle Shoals, Ala., started outside the front row but never completed a lap. He slipped off the banking in turns three and four, and when he refused the request of officials to restart on the tail of the 16-car field, elected to retire.

Three other cautions slowed the race. Randy Todd slowed on the frontstretch with mechanical problems on the fourth lap, Cale Finley lost a driveshaft on lap 20 and Braden Mitchell slipped over the banking in turns one and two on the 26th lap, two laps after Miller took second from Kittrell.