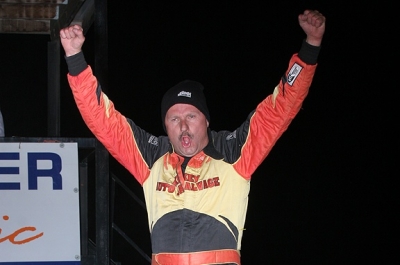 The win on the historic half-mile oval was good for $2,000, the series title another $5,000. Andy Eckrich was runner-up in both the standings, nine points back, and in the 40-lap race. Brian Harris, Ray Guss Jr. and Denny Eckrich completed Saturday’s top five.

Pole-starting Justin Kay led the first two circuits. Aikey took over until lap 12, when Andy Eckrich drove to the front. The first in a series of cautions negated an Aikey pass on lap 14, but he stayed close and caught Eckrich again on lap 34. He checked out from that point, winning comfortably ahead of Eckrich.