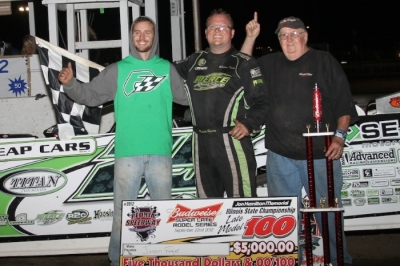 The third-starting Feger took the lead from Kevin Weaver of Gibson City, Ill., on the 11th lap and never looked back, crossing the finish line ahead of Kyle Logue of Cisco, Ill., and Wes Steidinger of Fairbury, Ill. Billy Drake of Bloomington, Ill., and Ryan Unzicker of El Paso, Ill., rounded out the race’s top five finishers.

Brian Shirley of Chatham, Ill., who started fifth and took second from Weaver on lap 33, lost a runner-up finish after failing to appear at the scales for postrace inspection.

“Brian sure made me work for that one," Feger said. "I'm exhausted. I was glad to see that caution come out with 25 to go so I could catch my breath. You could run anywhere on this track tonight, but we really had to work lapped traffic. We are on a roll right now, so hopefully we can keep it up for these late-season races.”