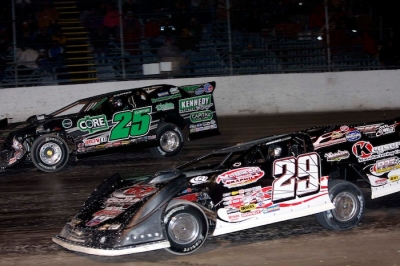 MARNE, Mich. (Sept. 22) — Darrell Lanigan’s drive to victory in Saturday night’s Keyser Manufacturing Down & Dirty 100 Presented by NAPA Auto Parts at Berlin Raceway was so dramatic, even he couldn’t hold back his excitement.

With rain pouring down on the Victory Lane celebration, the normally reserved driver from Union, Ky., was as pumped as the big crowd that watched him rally to overtake Billy Moyer for the lead on lap 95 and bag his unprecedented third 100-lap World of Outlaws Late Model Series triumph of 2012. | Video | Slideshow

“Unbelievable,” a visibly overjoyed Lanigan said after his WoO-record 15th win of the season. “Man, what a race! That car came on there at the end. I could just run wide open almost all the way around the racetrack.”

Lanigan, 42, appeared dead in the water after a lap-30 scrape damaged his Rocket car’s right-rear corner and dropped him from second to sixth, but he came alive with a late-race charge that carried him to a $20,650 win in the first dirt event since 1965 at the historic Berlin track. The renowned 7/16-mile paved oval was covered with over 300 truckloads of clay for the big weekend of racing.

After pulling away from Moyer of Batesville, Ark., following a lap-96 restart to win by 2.978 seconds, Lanigan had high praise for Berlin’s newly laid track surface.

“That track was amazing,” said Lanigan, who recorded his record 41st career victory on the WoO tour. “Man, we could race all over that thing. It was smooth and slick – just unbelievable.

“I think they need to do this to all asphalt tracks – put dirt on top of it, and once a year we’ll go racing.”

Moyer, who turns 55 next month, advanced from the fourth starting spot to lead laps 23-94 but settled for a runner-up finish in his Victory Circle car. He couldn’t stick with Lanigan following the race’s final restart but managed to outrun Rick Eckert of York, Pa., who finished third in his Team Zero by Bloomquist car after starting from the outside pole and briefly slipping out of the top five midway through the race.

Polesitter Shane Clanton of Fayetteville, Ga., led laps 1-22 but fell to fourth at the finish in a Kennedy Motorsports Capital Race Car that was plagued by left-front nosepiece damage sustained on lap seven while he was lapping former NASCAR Nationwide and Camping World Truck Series champion Johnny Benson Jr. Clint Smith of Senoia, Ga., completed the top five in his Rocket car, which he started from the 23rd spot because he used a provisional after forfeiting his heat-race transfer position for weighing in light at the scales.

Tim Fuller of Watertown, N.Y., finished sixth after starting 12th and climbing as high as second. He challenged Moyer for the lead just before the race’s first caution flag flew on lap 46 but he didn’t threaten again and faded after losing second to Clanton on lap 68.

Lanigan, who started ninth, experienced a fade of his own after his car sustained right-rear bodywork damage on the 30th lap as he overtook Clanton for second, but he was able to right his sinking ship in time to pull off another big-race triumph.

“We got going toward the beginning of the race and got to second and then I got my quarter-panel knocked up,” said Lanigan. “Man, I’m telling ya, I went from second to like sixth or seventh real quick. Then I had a caution (on lap 46) and (a WoO official) straightened that quarter panel back out (as allowed by series rules), and man, it was back on again.

“I didn’t really know the quarter-panel was bent up like it was, so man, I didn’t know what was going on. I just knew I was terrible for some reason. They straightened it out and it was good again.”

More than good enough, in fact, to propel Lanigan forward in stirring fashion with the event winding down. He cracked the top five on lap 69, then passed Fuller for fourth on lap 86, Clanton for third on lap 89 and Eckert for second a couple circuits later.

The last driver on Lanigan’s hit list was Moyer, who succumbed to the Bluegrass Bandit’s assault on lap 95. Lanigan surged underneath Moyer rounding turns three and four and vaulted ahead off the corner.

“Billy slipped up and little getting into three and left the bottom open,” said Lanigan. “Because I was fast through the middle of that corner, I was like, ‘Man, you’re in trouble now.’ I just put it in there and got by him.”

Moyer felt that Lanigan’s deciding pass was a bit aggressive, but he conceded that he was likely a sitting duck. The legendary driver found himself struggling during the final circuits after banging together entering turn one on lap 83 with the lapped car driven by Duane Treadwell of LaGrange, Ga.

“My car was really good until right there at the end,” said Moyer. “What happened that caused it to where (Lanigan) could even get in sight was when we got together with the 55 car and tore my right door up. It wasn’t the same car after that. There was a big hole in the door, and that must made the car a lot looser everywhere.

“(Lanigan) was a little better than we were at the end, yeah, but he could’ve passed me without running over me. Look at my left door – it’s caved in 12 inches.”

Lanigan’s victory pushed his 2012 WoO earnings over the $300,000 mark and also virtually assured him of another $100,000 check for winning his second career tour title. With a 210-point over Eckert, Lanigan can clinch the championship by merely finishing at least 26th in the season’s four remaining feature races.

Brandon Sheppard of New Berlin, Ill., finished seventh in Mark Richards’s Rocket Chassis house. He ran as high as fourth after starting 15th, but he slowed with a flat tire to bring out the race’s fourth and final caution flag, on lap 96, and rallied over the final tours.

Dennis Erb Jr. of Carpentersville, Ill., was a quiet eighth; Chub Frank of Bear Lake, Pa., limped home ninth after folding his car’s right-front bumper when he caught a hole in turn two while bidding for fifth place on lap 98; and Vic Coffey of Caledonia, N.Y. completed the top 10.

The most high-profile contender to retire early from the 100 was Tim McCreadie of Watertown, N.Y., who spun out of third place on lap 46 after he clipped an inside marker tire off turn two. He attempted to return after a pit stop but pulled off on lap 53 because his car’s bumper was folded under.

Thirty-two cars were signed in for the event, which was completed in one day after rain washed out Friday night’s scheduled qualifying program. Saturday’s show was run under a threat of rain but the showers stayed away until the skies opened just after Lanigan took the checkered flag.

Eckert was quickest in Ohlins Shocks Time Trials, blazing around the D-shaped track in 15.433 seconds to earn his fourth fast-time honor 2012.

The next action for the WoO LMS will come during NAPA Auto Parts Super DIRT Week XLI with a visit on Thurs., Oct. 4, to Rolling Wheels Raceway Park in Elbridge, N.Y.