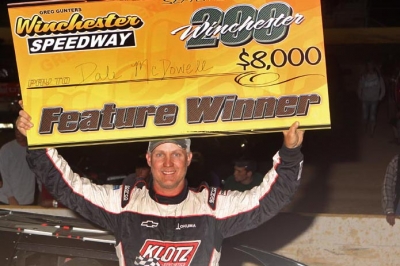 Dale McDowell earned $15,000 for his weekend sweep at Winchester. (pbase.com/cyberclash)

McDowell, who earned a $3,500 victory in Friday’s Winchester 200 semifeature, led every lap of Saturday night’s 50-lap finale for an $8,000 payday. McDowell also earned a $1,000 victory in one of Saturday’s two 25-lap qualifying features and a $2,500 bonus for being a first-time winner of the event, pushing his total weekend gross to $15,000. | Slideshow | McDowell wins Winchester opener

“That will certainly make the ride back home to Georgia pretty nice.” McDowell, who debuted a new MasterSbilt Race Car for Team Dillon Racing, said of his weekend’s earnings. “I knew we had a good race car and it was important to beat (Myers) into the first turn at the start, and we were able to do that.

“This has been a great weekend. To come here this weekend with a brand new race car and win every race we were in, just shows what a great team we have in TDR racing.”