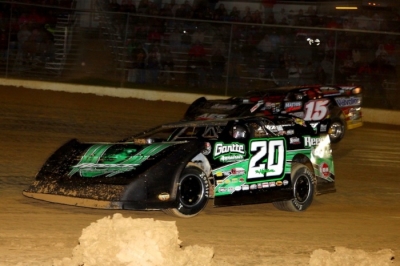 “We’ve gotta keep our head about us and go out there and win races as much as we can,” the 40-year-old Newport, Tenn., driver said Saturday night at Brownstown Speedway. “And if we can just keep the decent finishes coming, we can probably hold everybody off.” | Prelims | Video | Slideshow

Consider his performance in the 33rd annual Jackson 100 to fit that strategy perfectly as Owens started on the pole, kept his poise in fighting off a few early challenges from Steve Francis, then cruised the final 70 laps for a $20,000 payday in the race sponsored by Industrial Solutions Technology of Columbus, Ind.

Owens led by as much as a straightaway most of the race, built a cushion of three lapped cars near the midpoint, and left the filled grandstands at the quarter-mile oval without a doubt who was best on a chilly September evening.

“The car was great. As soon as they threw the green flag we were able to jump out to the lead,” said Owens, who notched his fifth series victory of the season and 34th of his career. "Really, I didn’t have to maneuver nowhere, but I felt like we were going to be able to move up, down — if the groove moved, we were prepared to maybe be able to move with it. But it looked like it stayed pretty well dominant on the bottom.

“We could move out and pass some of the lapped cars and slower cars, but cautions fell out way, and we brought this one home.”

Francis, of Ashland, Ky., pulled alongside Owens a few times amid traffic in the race’s early stages, but he finished more than a straightaway behind at the checkers of the two-day event.

Scott Bloomquist of Mooresburg, Tenn., who started 11th, survived a lap-60 scrape with Jonathan Davenport to finish third in his failed attempt for an unprecedented third straight Jackson 100 victory. Mike Marlar of Winfield, Tenn., gutted out a fourth-place finish as one of the few drivers running the high groove while Earl Pearson Jr. of Jacksonville, Fla., who started ninth and ran as high as second, rounded out the top five.

Owens stuck with the extreme low groove through the first half of the race, but when officials edged the infield tire barriers onto the racing surface at a lap-54 caution, he found it forced him to run a higher line that turned out to be even better.

“It felt like were just putting around through there so slow, and I really felt like I could move up and go faster,” Owens said. "Once they moved the (tire barriers) out, my car felt way better. We were able to arc the corners a whole lot more and it just felt like I had a whole lot better cars with the tires out than what we did on the bottom.

“I just let the car float out there one time, and hit that extra traction. I was able to enter the corner another 10 mph faster, and that helped my car hold its attitude, and it just made my corner speed a whole lot better.”

The fourth-starting Francis, who lost the second spot a few times but always managed to get back to the runner-up spot, said he simply couldn’t keep up with Owens on a surface he called "probably the slickest thing I’ve been on ... the new dirt they’ve got here is just like ice.

“We kind of lost (steering capabilities with) the right-front tire after about 30 or 40 laps there, and just kind of had to keep the car in a slide all the way around the racetrack. I knew that was going to be good enough to run with Jimmy, but it was better than Scott and them guys. ...

“I couldn’t run as wide down the straightaway as (Owens) could and carry that speed across the center of the corner.”

Bloomquist nearly got sideways on the frontstretch on lap 60 while battling with the higher-running Davenport for the fifth spot in what Bloomquist called a move of “desperation,” but he kept a handle on his car while Davenport ended up slowing to draw a caution shortly thereafter. The contact left its mark.

“We just got done measuring the front end,” Bloomquist said in the pits afterwards, "and Davenport made that wild move across the front straightaway, and just come off the top and just killed me in the right-front tire.”

While Bloomquist gained 10 positions, he was merely among a field of 25 drivers who nothing for Owens, who picked up his first career victory in Brownstown’s richest race. He looks forward to picking up a few more checkered flags in the season’s waning weeks.

Notes: Owens drives a Mike Reece-owned Bloomquist Race Car with a Cornett Racing Engine and sponsorship from Reece Monument, Gantte Appraisals, Red Line Oil, FK Rod End and Sunoco Race Fuels. ... The feature was slowed by four cautions, all for minor incidents. Brad Neat stopped on lap 29, Tyler Reddick spun alone on lap 54, and Greg Johnson slowed on lap 71. ... Tim Rivers slid into tire barriers at the end of he backstretch on lap 61. ... Three-time race winner Don O’Neal started 15th and ran as high as fifth after pitting to change a left-rear tire; he finished sixth. ... The night’s action was delayed more than 90 minutes by a wet racetrack that took extra practice laps and a grading of the inside groove before it was race-ready. ... A.J. Bingham served as race director for the series; Ritchie Lewis was spending the weekend with Lucas Oil's off-road series. ... Friday’s time trials set the lineups for Saturday’s heat races, high-speed affairs that featured some good action. ... Jeremy Hines of Seymour, Ind., earned his feature starting berth through a dash among local drivers that gave the winner a provisional starting spot. ... Steve Casebolt broke a driveshaft in his heat, then came from the tail in a consolation to reach a transfer spot before a spin after problems with his rear end gears. ... Chris Streeval started on the front row of a consy but hit the frontstretch wall. ... Among other drivers failing to make the feature lineup: Chad Stapleton, Wayne Chinn, Brandon Kinzer, Justin Rattliff, Josh McGuire, Steve Barnett and Joe Godsey. ... Next up for Lucas Oil competitors is the Sept. 27-29 Knoxville Late Model Nationals at Knoxville (Iowa) Raceway, which features a pair of $7,000-to-win semifeatures and a $40,000-to-win finale in one of Dirt Late Model racing’s richest weekend’s of the season.