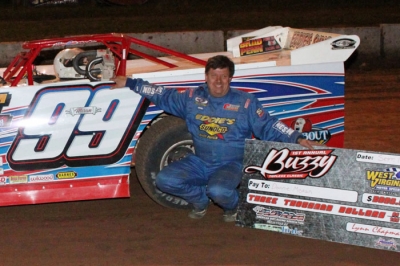 Starting from the pole, Moran, a multi-time winner on WVMS’s previous 5/8-mile configuration, led every lap of Sunday’s race, outdueling fellow front-row starter Jared Hawkins of Fairmont, W.Va., early in the race and pulling to a straightaway advantage over sixth-starting Eddie Carrier Jr. of Salt Rock, W.Va., in the closing laps.

“Any time you win is great, but that’s a big win,” Moran said of his second ADRA victory of the season. “I raced and won a lot the way the track was and to win on it with (the new configuration), that made it special. Plus, to beat guys like Eddie and Hawkins, that’s a pretty good run.”

Carrier settled for second at the finish while Hawkins finished third ahead of Doug Drown of Wooster, Ohio, and Rod Conley of Wheelersburg, Ohio.

Carrier couldn’t recover after a redraw among the top eight qualifiers put him at the tail of the night’s qualifying dash.

“To have to come from the tail of that dash, that really put us behind for the night,” Carrier said. “If we could’ve started on the front row and got out front maybe we could’ve been hard to pass. But Donnie was really good. He had the car to beat in the feature.”