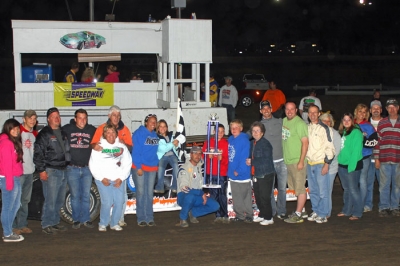 PEORIA, Ill. (Sept 15) — On a night when events at Peoria Speedway were held in memory of Peoria racing legend Herb Shannon Sr., Steve Shannon found his own way to honor his grandfather.

After the race, Shannon, whose victory came less than a week after his grandfather passed away, dedicated his performance to Herb Shannon Sr. in an emotional victory lane interview.

“I usually never run the high side, and it was rough there, but Grandpa was riding with me tonight,” Shannon said. “It's been a tough week, but I want to dedicate this win to my grandma and grandpa. Our family really needed this win and I'm glad we could bring it home. This is special, winning the State Championship tonight.”

Shannon started third in the 20-lap race in and moved by hometown driver Jack Siegel for second on lap three.

Shannon then set his sights on Feger, but a challenge from Kenny Egan of Bellevue, Ill., briefly slowed his progress. Egan wrestled the second position away from Shannon on lap seven, but a caution before the lap was completed gave Shannon the spot back.

There was no stopping Shannon from there as he jumped to the high groove on the restart and tracked down the leading Feger. Shannon blasted around Feger on lap 10 and survived a final restart on lap 13 on his way to the victory.

Egan overtook Feger to score the runner-up finish while Brian Crebo of Hanna City, Ill., also moved by the early leader to finish third. Feger slipped back to fourth at the finish with Siegel rounding out the race’s top five finishers.

As part of the festivities that honored Herb Shannon Sr., $20,000 was donated to Bradley University for Parkinson's Research. Shannon’s daughter-in-law Cyndi Shannon presented the check on behalf of the Bohlander family, who made the donation in memory of Shannon.