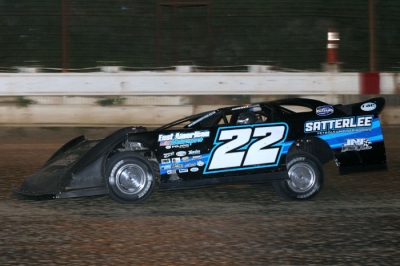 Satterlee crossed the finish line first in the UFO Race Championship Series event for his 12th feature victory of the season overall and his second at Pittsburgh's Pennsylvania Motor Speedway.

Richards, of Shinnston, W.Va., was leading big when a lap-33 tangle with Kari Gasser’s slower car knocked him out of the race in 24th.

Keith Berner and Norris started on the front row with Berner leading the first two laps. Norris took control on the third lap, but Richards, taking a weekend off from the NASCAR Nationwide Series, went out front on the 11th circuit.

With Richards out front, Norris, Satterlee, Berner and Jared Miley gave chase with Satterlee taking the second spot from Norris on the 14th lap. Miley took third on the 18th lap while Barbara also moved into the top five.

While the frontrunners tightened amid traffic, Barbara briefly took third from Miley on lap 23, but the pair tangled and Barbara’s spin resulted in him going to the track.

With clear track ahead on the restart, Richards opened a big lead in the hunt for his second Pittsburgher title. But while lapping Gasser on lap 33, the pair tangled and the crashed ended the night for Richards.

That handed the lead to Satterlee with Miley, Russ King and Norris making up the top four.

On the ensuing restart, Satterlee and Miley tangled, ending Miley’s race. Because the green flag never appeared, officials rule, Satterlee was restored to the lead.

Satterlee led into the second half of the 53-lapper with Hess, King, Norris and Coleby Frye giving chase. Satterlee built a comfortable lead before a lap-45 caution as Frye got a flat tire and tangled with Steve Baker.

With Satterlee still out front, Barbara continued his rally from the rear as part of a flurry of drivers battling behind the leader. Satterlee held on at the finish while Barbara got back to fourth and Geisler outdueled Baker for fifth on the final lap.