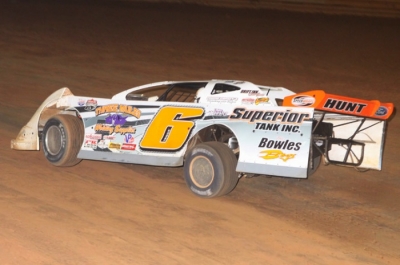 The 33-year-old Lathroum took the lead when Steve Francis of Ashland, Ky., spun on the 18th lap and led the rest of the 50-lap main event for a career-high $20,000 payday, his first on the Lucas Oil Late Model Dirt Series. | Slideshow | Video

Francis, of Ashland, Ky., was just one of the drivers in the Lucas Oil field who ran into trouble with either the track or another competitor as polesitter Steve Shaver of Vienna, W.Va., twice ended up facing the wrong way, Don O’Neal of Martinsville, Ind., spun after contact from Jared Landers and former VMS winner Chris Madden of Gray Court, S.C., was involved in a scramble that also eliminated Dale McDowell of Chickamauga, Ga.

Lathroum tried out a different suspension setup for the conditions in practice, but ended up going with the setup that helped him to victory the previous weekend at Roaring Knob Motorsports Complex in Markleysburg, Pa.

“We went out there and hot laps, and I said, ‘I’ll kill myself if we keep this setup on here.’ So we made a decision to put (the setup) we had on last week, and it was the right thing to do,” Lathroum said.

“The track was pretty rough, but that made it racy,” said Lathroum, the 2005 track champion at VMS. "Sometimes you don’t know where you’re going to end up at.”

Falling short of his second Lucas Oil victory of the season at VMS, Scott Bloomquist of Mooresburg, Tenn., finished second with John Blankenship of Williamson, W.Va., in third. O’Neal recovered from his early spin to finish fourth and Earl Pearson Jr. of Jacksonville, Fla., rounded out the top five in a race where nearly half the 24 starters were in the pits at the finish.

The front-row starters were among those who weren’t around when the checkered flag fell. Francis ended up being sent to the pits after causing another caution on lap 42 and Shaver, who survived a spin on an early restart, wasn’t so lucky the next time when Blankenship clipped him in turn two while he was running second, triggering a pileup that included Ricky Elliott, Eric Wells and Jonathan Davenport.

Francis was in control in the early stages, but Lathroum was pressuring him when he got too high in turn three, jumping the cushion and spinning to hand the lead to Lathroum.

After a turn-four wreck shuffled the top five, Lathroum went back to work out front with Pearson and Blankenship giving chase near the midway point.

Blankenship squeezed by Pearson to take second and cut into Lathroum’s comfortable lead amid traffic, but he couldn’t make a move on the leader.

Lathroum then stretched his lead back out while Bloomquist took third from Pearson on lap 43, then took the second spot from Blankenship on lap 46. But Lathroum was too far ahead, staying in control in the final stages to become the tour’s 15th winner of the season.

Notes: Lathroum’s MasterSbilt Race Car is powered by an Eatmon Racing Engine and sponsored by Three Mules Welding, Claar Logging, Superior Tank, The Bowles Boys, Lathroum's Seafood, Integra, Abell Auto Glass and Eugene Copsey's Plumbing. ... Lathroum’s previous richest victory was in 2009 on the World of Outlaws Late Model Series at Delaware International Speedway when he earned $10,000. ... Tyler Reddick earned Optima Batteries Hard Charger honors with his 21st-to-sixth run after he made an early pit stop. ... Prelims at VMS were held Friday. ... Next up for the Lucas Oil Series is the Jackson 100 at Brownstown (Ind.) Speedway on Sept. 21-22.