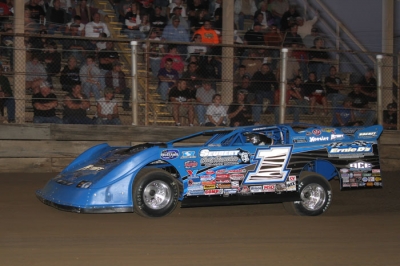 Racing in front of his home-state fans, the fast-rising 19-year-old star from New Berlin, Ill., emerged triumphant in the Photobilly 50 to complete a sweep of the national tour’s first-ever program at the fifth-mile fairgrounds bullring. | Video | Slideshow

Sheppard lowered the track record in time trials, led every lap of his heat race and paced the evening’s headliner from start-to-finish behind the wheel of Mark Richards’s high-profile Rocket Chassis house car.

“This is just an amazing feeling,” said Sheppard, who pocketed $12,550 for the biggest victory of his young career. “It’s a huge confidence booster for me to get my first (World of Outlaws) win off my back. We had a close one a couple weeks ago (on Aug. 18 at Merritt Raceway in Lake City, Mich.) when Josh (Richards) won and we ran second, so it feels really good to know that I can do it.”

Sheppard, who started from outside of the front row, outgunned polesitter Brian Shirley of Chatham, Ill., for the lead at the initial green flag and never looked back. But he had to survive five caution flags and a late-race threat from Hall of Famer Billy Moyer of Batesville, Ark., to preserve the victory.

Moyer, who turns 55 next month, moved his Victory Circle machine into the runner-up spot on lap 25 when Shannon Babb of Moweaqua, Ill., was penalized two positions, to fourth place, by WoO officials for firing early on a restart. The three-time WoO champion fought off a brief challenge from Babb following a lap-39 caution period and drew close to Sheppard on the final lap but settled for a second-place finish, 0.675 of a second behind the winner.

Babb, 38, faded after crunching the right-rear corner of his Victory Circle car against the outside wall on lap 42, leaving him over three seconds behind Moyer in third place at the checkered flag. He started the race on a roll — advancing from the sixth starting spot to second in just 11 laps — but never seriously challenged Sheppard before absorbing his mid-race penalty.

WoO points leader Darrell Lanigan of Union, Ky., finished fourth in his Rocket Chassis, breaking into the top five late in the distance after starting 14th. Kyle Logue of Cisco, Ill., registered a career-best WoO finish of fifth in his Pierce car after overtaking Clint Smith of Senoia, Ga., on the last circuit.

Sheppard credited his success to his previous experience at the tricky Belle-Clair oval, specifically, his third-place run in June 25’s UMP DIRTcar Summernationals.

“I think a big advantage for us over these Outlaw guys was that we were able to come here for the Summernationals,” said Sheppard, who faced WoO regulars that had ever competed at in Dirt Late Model action at Belle-Clair. “We got a little bit of an idea (of how to set the car up). Especially for feature time, we had a pretty good idea of where we needed to be at.”

Sheppard ended up with a virtually flawless car that he was able to expertly steer around the track’s cushion. But he did have some anxious moments in the final laps when he found himself stuck in heavy lapped traffic, which allowed Moyer to close in.

“I knew there weren’t no slouches behind me,” said Sheppard, “so I knew every lap the lapped cars were holding me up, that was time I was losing. I was just thankful to see the white flag come out because I could hear (Moyer) getting on me.”

Sheppard became the 47th driver to win a WoO event since 2004. He’s the tour’s fourth first-time winner this season and the third-youngest driver in history to win on the circuit, behind Josh Richards (17 years old when he won his first race in 2005) and Austin Hubbard (age 18 in ’10).

In addition, Sheppard is the third driver to put Mark Richards’s blue dirt Late Model in Victory Lane on the WoO, joining Bart Hartman and Richards’s son Josh. Sheppard was tapped in May to replace Josh in the seat of the championship-winning No. 1 after the younger Richards decided to leave the World of Outlaws trail to pursue a NASCAR career on the Nationwide Series.

With Sheppard’s triumph, the elder Richards had reason to feel good about his driver choice.

“Brandon’s a great kid,” said Mark Richards. “We couldn’t ask for a better guy to be in here driving for Josh while Josh is off doing what he wants to do with the Nationwide deal.

Clint Smith was the race’s sixth-place finisher after climbing as high as fourth from the 12th starting spot. Tim Fuller of Watertown, N.Y., placed seventh; Tim McCreadie of Watertown, N.Y., was eighth after using a provisional to start 24th; Shane Clanton of Fayetteville, Ga., salvaged a ninth-place finish after a turn-three tangle with Shirley on lap 10 as they were battling for third forced him to the rear of the field; and defending WoO champion Rick Eckert of York, Pa., was 10th after relying on a provisional to start 23rd because a broken driveshaft knocked him from the lead in his heat race.

Notes: The winner’s Rocket Chassis is sponsored by Seubert Calf Ranches, Ernie D’s Enterprises and Ace Metal Works. ... Sheppard’s lap of 11.195 seconds lowered the track record of Rodney Melvin of Logan, Ill. ... Sheppard broke through for his first WoO victory in his 16th career start. ... A banner field of 52 Dirt Late Models were signed in for the Photobilly 50, which was run in memory of late Belle-Clair Speedway photographer Charlie Haffer Jr. ... Eighteen drivers finished on the lead lap. ... Jason Feger of Bloomington, Ill., was leading the fourth heat when apparent driveline problems forced him out. ... Among other drivers failing to make the feature lineup: Melvin, Nick Lyons, Michael Kloos, Jack Sullivan, Kent Robinson, Rusty Griffaw, Mike Schulte, Pat Doar, Mike Hammerle, Jill George and Wendell Wallace, who was an apparent consolation race winner until he came up light at the scales. ... WoO competitors will complete a St. Louis-area doubleheader Saturday with the running of the 55-lap Pepsi Nationals at Federated Auto Parts Raceway at I-55 in Pevely, Mo.