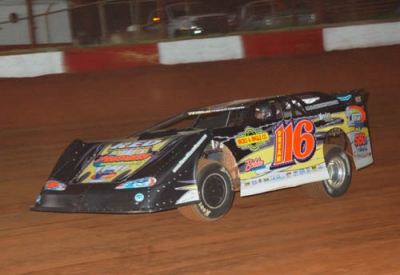 Randy Weaver entered the April 18-19 weekend without a 2008 victory. He ended the weekend a two-time winner and $6,000 richer after a successful trip to Georgia. Weaver earned $3,000 for his victory in the Big Friday 40 at North Georgia Speedway in Chatsworth on Friday, then followed that Saturday with a victory in Dixie Speedway's Spring Short Track Championships in Woodstock, Ga.

Weaver made a dramatic move on the 14th lap at North Georgia to go from third to first in the inside groove. "I just put the car up in there, where they weren't expecting it," said Weaver, who moved past Jake Knowles and Gary McPherson to take command. "It work, but it sure was a gamble." Weaver took the checkered flag ahead of Jake Knowles, a rallying Ronnie Johnson, Joe Armes and Tony Knowles.

The following night, Dixie Speedway opened its 39th season and its first after the death of long-time promoter Mike Swims, a member of the National Dirt Late Model Hall of Fame. Weaver led all 40 laps of the feature event to top four Georgians: Tony Knowles, Jeff Smith, Tim Day and Wayne Echols.

SATTERLEE BLASTS OFF AT CHALLENGER: Gregg Satterlee of Rochester Mills, Pa., earned $2,000 April 19 at Challenger Raceway near Indiana, Pa., with a victory in a 33-lap feature event. The race was a prelim for the first-ever UFO Series event, but that April 20 race was rained out and reset for April 27. Satterlee got the jump on fellow front-row starter Davey Johnson and led all the way. Dutch Davies finished second ahead of Dave Hess Jr., Rob Blair and Keith Barbara. Johnson finished sixth. — From track reports

OCALA DRAWS ASPHALT STANDOUTS: With Ocala (Fla.) Speedway digging up its asphalt and going back to dirt for 2008, at least a few Florida asphalt Late Model regulars are getting a taste of dirt action. Former Snowball Derby winner Wayne Anderson of Wildwood, Fla., and asphalt champion Mike Bresnahan of Lecanto, Fla., were both in action for Ocala's April 18 event, won by Ivedent Lloyd Jr. Bresnahan posted a third-place finish, but Anderson's new Dirt Late Model wasn't on the track long. Anderson's No. 84 backed into the turn-two wall in hot laps and his night was over. — From track reports

DUBLIN AND HAMMER DOWN POST BONUSES: Dublin (N.C.) Motor Speedway and Hammer Down Speedway in Red Springs, N.C., are offering a $1,000 bonus to any Super Late Model or Limited Late Model driver who can sweep weekend races at the tracks. Also, if any driver can win track championships at both tracks, he'll receive an $8,000 bonus. Additionally, Hammer Down will add $500 to its weekly Late Model purse if at least 12 cars are on hand. — From track reports

TERRY SMITH GOES BACK TO BACK AT TALLADEGA: Terry Smith of Anniston, Ala., won his second straight victory April 19 at Talladega Short Track in Eastaboga, Ala. His second victory came with a little drama. Smith never led until taking the lead exiting turn four on the final lap. Smith dove to the bottom of Ross Martin in turn three, then used the low line and lapped traffic to his advantage. Martin finished second with Dingus Griffin third. — Dennis Anton

TWO-TRACK CHALLENGE FOR STEEL BLOCKS: Two Virginia tracks, Eastside Speedway and Natural Bridge Speedway, have combined for a six-race miniseries for steel block Late Models. Natural Bridge's dates are May 16, July 5 and Sept. 6. Eastside's dates are May 17, July 3 and Sept. 5. The 50-lap races pay either $1,000 or $1,500 to the winner. Any driver winning four of the six races will receive a $1,000 bonus. — From track reports