Notes: Dramatic finishes common at I-55 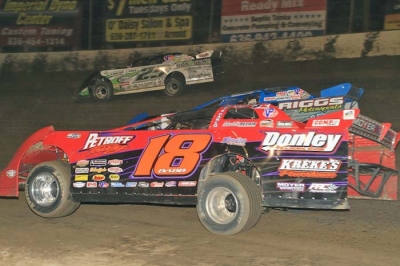 If there’s one near-certainty about the $10,000-to-win, $1,000-to-start Pepsi Nationals on Saturday at Federated Auto Parts Raceway at I-55 in Pevely, Mo., it’s that fans can expect a memorable, down-to-the-wire shootout for the 55-lap race’s top prize.

History is a great indicator of what’s in store at the high-banked, third-mile oval promoted by NASCAR veteran Ken Schrader and Ray Marler. There have been five WoO events contested at I-55 since 2005 and only one — last year’s Pepsi Nationals won by two-time tour champion Josh Richards of Shinnston, W.Va. — did not feature a rip-roarin’, late-race battle for the checkered flag.

• In 2005, Billy Moyer of Batesville, Ark., grabbed the lead from protege Shannon Babb of Moweaqua, Ill., late in the distance — just after Babb’s car spewed smoke due to a busted power-steering hose that left him wrestling his mount for the remainder of the race — and held on for a big victory on his road to winning that year’s WoO title.

• Clint Smith of Senoia, Ga., was triumphant in 2007 after surviving a restart with three laps remaining that allowed Babb and Randy Korte of Highland, Ill., to make stirring bids for the lead.

• Babb gained a dose of redemption on Moyer in 2010, outdueling the legendary driver to take the lead for the final time on lap 48 of the 55-lapper. Babb beat Moyer to the checkered flag by .411 of a second in a race that many observers ranked as one of the best the Dirt Late Model division produced in ’10.

Can Lanigan break through?

WoO points leader Darrell Lanigan of Union, Ky., has already won a record 14 tour races at 14 different tracks in 12 states and one Canadian province this season. He’d love to add Federated Auto Parts Raceway at I-55 to his list of conquered speedways — not only for this year, but for his career.

With Lanigan holding a 172-point lead over Rick Eckert of York, Pa., entering this weekend’s action, he’s rolling toward his second career championship. He currently needs only to average a 12th-place finish over the final seven races of 2012 to clinch the crown.

A quality group of drivers have announced plans to battle the Outlaws in both events, including Billy Moyer and his son, Billy Moyer Jr.; Babb; Dennis Erb Jr. of Carpentersville, Ill.; Brandon Sheppard of New Berlin, Ill., who will drive the Rocket Chassis house car; Michael Kloos of Trenton, Ill.; Jack Sullivan of Greenbrier, Ark., who returns to the WoO for the first time since dropping off the circuit as a regular in mid-August; and Wendell Wallace of Batesville, Ark.

Racers planning to compete only at Belle-Clair include Feger, 2012 Summernationals champion Brian Shirley of Chatham, Ill., reigning UMP DIRTcar weekly champ Ryan Unzicker of El Paso, Ill., and Mike Spatola of Manhattan, Ill., while last week’s World 100 winner Brian Birkhofer of Muscatine, Iowa, is among those expected to join the action at I-55.

Both the Belle-Clair and Federated Auto Parts Speedway at I-55 WoO events will be contested under UMP’s Hoosier tire rule (LM 20, 30 and 40). ... Pre-race feeds for the drivers are planned for both Belle-Clair (2 p.m.) and I-55 (noon), and WoO stars are scheduled to sign autographs in the grandstand area at Belle-Clair at 5 p.m. Friday. ... For ticket information and other details, visit worldofoutlaws.com/tickets or call (877) 395-8606. ... Track information is available at belleclairspeedway.com and federatedautopartsraceway.com.