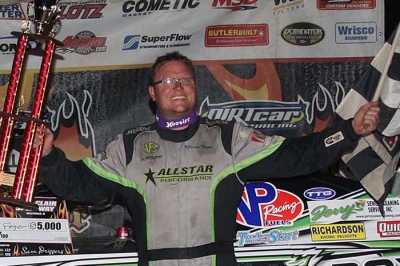 “You need to get there early and see everybody’s face when they look at the track,” said Feger, a 34-year-old resident of Bloomington, Ill., who has entered special shows at Belle-Clair for several seasons. “It’s gonna be pretty interesting.”

Indeed, the fifth-mile bullring — the smallest track ever to appear on the WoO schedule – will elicit some wide-eyed reactions from the national tour’s regulars before the Sept. 14 event. Just one of the circuit’s 11 current travelers has raced at Belle-Clair, and that driver, rookie Kent Robinson of Bloomington, Ind., has only run a UMP modified there.

“You ain’t seen nothing until you’ve seen that place,” said Feger. “It is tiny, definitely the smallest track I’ve ever been on. The size is definitely a big equalizer, so I could see a first-time Outlaw winner on Friday night.”

A former UMP DIRTcar Summernationals champion, Feger will enter Friday’s $12,000-to-win, $1,000-to-start Photobilly 50 — the richest race in the history of the track — less than three months removed from earning his first career win at Belle-Clair in a Summernationals event. It was a very satisfying triumph for the driver known the Highside Hustler.

“The Summernationals this year was definitely the best race we’ve ever had there,” said Feger, who won three features en route to a fourth-place finish in the 2012 Summernationals. “We’ve had some trouble figuring the place out in the past, but we were good that night. I was able to win it on softer tires than any of the times I was there before because they reworked the track.”

Thanks to his June success at Belle-Clair, Feger feels that he’s ready to challenge the invading World of Outlaws regulars in a highly anticipated event that is being billed as the most unique on the tour’s 2012 schedule.

“It takes a different mentality to race there,” summarized Feger, who is coming off a solid fifth-place finish in last Saturday night’s prestigious World 100 at Eldora Speedway in Rossburg, Ohio. “It’s a tough place. It’s tight quarters. You definitely need to have some give-and-take there.

“Physically, it’s similar in size to (fifth-mile) Macon (Speedway), but it has an infield wall so it races smaller, if that makes sense. Macon doesn’t have an infield wall, is a little bit rounder, has more banking and more traction in the dirt, so you carry more speed into the corners. That infield wall changes things at Belleville, makes it more challenging.

“Man, it’s gonna be interesting,” he added. “Starting 24 cars, it won’t take long at all to get in lapped traffic — and with the quality of cars that are gonna be there you’re gonna be lapping high-caliber guys, which will make it that much tougher.”

Feger, who has qualified for the feature in all 10 of his WoO appearances this season and accumulated five top-10 finishes, would relish a victory Friday, but not merely because it would give him a sweep of the track’s two major events this season or even because of the $12,000 payday. He would like to grab the race’s checkered flag because of the man it honors: well-known St. Louis-area photographer Charles Haffer Jr. (aka Photobilly), who lost his life on Aug. 7 at the age of 44 in an Iowa highway accident while heading home from a sprint-car race.

“I think anybody from around here in Illinois had to know him,” Feger said. “He actually was probably my favorite photographer. He’d take your picture, and he’d always bring you the picture the next time he saw you.

“He was a super nice guy. He would talk to everybody before every race and tell you, ‘Good job’ after it. He truly loved racing a ton — it wasn’t just a hobby for him, it was his life.”

As part of Friday’s memorial for Haffer, who served as Belle-Clair’s track photographer, a specially-designed Photobilly 50 T-shirt will be on sale with all proceeds going to Haffer’s daughter, Danielle.