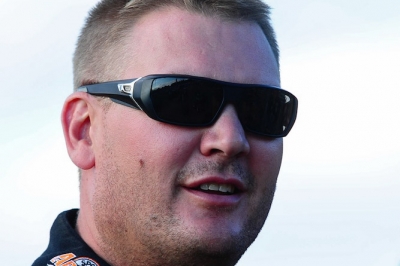 Brady Smith has six victories in his last 12 starts. (mikerothphotography.com)

If Brady Smith was disappointed after going winless through the first half of the season, he’s more than made up for it over the past month. After failing to reach victory lane through July, Smith, the 35-year-old standout driver from Solon Spring, Wis., has reeled off six victories in his past 12 starts.

Not that he was ever seriously worried about it, but if nothing else, the recent hot streak was an emphatic end to any chance that Smith would go winless for the entire season.

“I didn’t really ever think I would (go winless), but you certainly don’t ever count on winning races, especially when you keep getting so close and not winning,” said Smith, whose latest triumph was a $9,200 payday in Saturday’s John Seitz Memorial at River Cities Speedway in Grand Forks, N.D. “You maybe start thinking if it’s going to be like that all year, but thankfully we don’t have to worry about that anymore.”

Smith’s long drought to start the season wasn’t a sign of poor performance. While his year began below his usual standards, Smith was a contender in major events throughout the summer, most notably on the World of Outlaws Late Model Series’ Wild West Tour. Smith finished in the top five in three out of five races during the national tour’s trek through the upper Midwest, adding another top-10 finish for good measure.

“Really we’ve been running well since about June,” said Smith, who has four career World of Outlaws victories. “We just weren’t quite able to pull off any wins. We ran up front, getting top fives in World of Outlaws races. We had a bunch of good runs, just hadn’t got wins for whatever reason.

“When a guy can run up front up against that competition, you know your program is close to where it needs to be. If you can get a top five against those guys and do it somewhat consistently, if definitely builds confidence in your program.”

Since his solid outings with the Outlaws, Smith has put together his recent hot streak while sticking close to home and racing in mostly WISSOTA Late Model competition. While he’d like to compete in more national events, the late-summer specials in his home region are a good fit for Smith.

“It’s nice to be able to race fairly close to home for good money. I’d like to get out to the bigger races all the time, but this time of the year when there’s races close to home that pay decent, we’re gonna plan on attending those,” Smith said. “There’s a bunch of good runners up here. The rules are different with the spec motors, but there’s definitely a bunch of good guys up here that run. It’s always good to come back and finish up front against these guys.”

Smith plans to enter another regional event close to home in this weekend’s $5,000-to-win Legendary 100 at Cedar Lake Speedway in New Richmond, Wis. He’ll return to the national level in two weeks at Knoxville (Iowa) Raceway’s Lucas Oil Knoxville Nationals on Sept. 27-29, the prestigious race that Smith won in 2007. Smith will wrap up his season a few weeks later with his first trip to Portsmouth (Ohio) Raceway Park for the 32nd annual Dirt Track World Championship Oct. 19-20.

“Without a doubt it’s a different mentality racing Knoxville or the Dirt Track World Championship versus these special events we’ve been racing in our area,” said Smith, who finished second in the 2009 DTWC at Lawrenceburg (Ind.) Speedway. “You’ve gotta race a little different, but I feel I should have no problem adjusting right to that. We’ve been doing this long enough that we can usually jump right back in with those guys.”

Smith’s transition should be aided by the momentum he’s picked up from his recent victories.

“We always look forward to going to Knoxville. We typically run well there, and it’s always nice to go down there with some momentum,” Smith said. “It’ll be our first trip to Portsmouth, but I’m just as excited about heading down there.

“We know we’re capable of running up front with the best guys in the country. We’re looking forward to ending the season with hopefully some good runs in some big shows.”

“When a guy can run up front up against (the World of Outlaws), you know your program is close to where it needs to be. If you can get a top five against those guys and do it somewhat consistently, if definitely builds confidence in your program.”