Notes: I-55 modified ace gets hang of Late Models 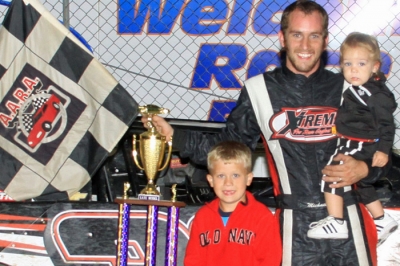 With only a few Late Model starts under his belt, Michael Long surprised even himself when he won Aug. 18’s weekly UMP Super Late Model feature at Federated Raceway at I-55 in Pevely, Mo.

The open-wheel modified ace from Quincy, Ill., is aiming for another surprise performance Saturday night at I-55 when he takes on the national touring stars of the World of Outlaws Late Model Series in the third-mile oval’s Pepsi Nationals.

“I was pretty surprised we could go down there and win at Pevely that soon,” said Long, 30, whose breakthrough victory came in just his second start in a car normally driven by his brother-in-law Rickey Frankel. “There’s some pretty good guys that race down there at those weekly shows, and there’ll be a ton of really good cars with the Outlaws. To go back down there and run good against those guys ... that would be an even better surprise.”

If Long were to win Saturday’s $10,000-to-win event, it would no doubt be considered a major upset. But for him to score a solid finish in the race perhaps wouldn’t be so surprising, especially considering how well Long has performed over the past month.

He has proven his early victory was no fluke by consistently running up front in every race he’s entered since taking over the ride. While he’s yet to make another visit to victory lane, Long has recorded a total of four top fives in five starts behind the wheel of Frankel’s car while racing at I-55 and his hometown track Quincy Raceways. His only finish outside the top five came in a MARS DIRTcar Series event at I-55 on Aug. 25 when he was running sixth before being involved in a late caution.

The solid showings have Long excited about his chances of running well Saturday night.

“Things have gone really well since we got in the car and we’ve actually been really good at Pevely,” Long said. “If I get qualified in good, I think we’ll be pretty good down there again Saturday. And if we can stay out of trouble, I think we have a pretty good shot of getting a good run.”

Long’s early Late Model success has come after more than a decade of standout performances in the modified division. He started in mods in 2000 and has picked up multiple track titles throughout his modified career. He won at least 20 features every season from 2007 through 2011 and was the runner-up in the 2010 UMP modified weekly points chase.

His modified success led to Long’s chance to climb behind the wheel of Rick Frankel’s Rocket Chassis when son Ricky decided to take off the second half of this season. Long’s transition to full-fendered competition proved to be an easier task than he expected.

“The car was pretty easy to get used to,” Long said. “The modifieds run quite a bit of motor with smaller tires. With a Late Model, you have so much more tire that they’re a little more forgiving and actually a little bit easier to drive.”

With Frankel expected to return to his ride at the start of next season, Long is already looking for options that will allow him to remain in the Late Model division.

“I’ve thrown around the idea of not running my modified so much and maybe getting more into the Late Models, maybe even get my own Late Model,” said Long, who plans to field Frankel’s car in a number of other events before the end of this season, including a trip to Knoxville (Iowa) Raceway for the Lucas Oil Knoxville Nationals on Sept. 27-29.

“I’ve had a few people talk to me about my plans and what I’ll do next year,” Long added. “We’ll just have to wait and see what happens over the winter. I’d still like to do a little bit of modified stuff, just the bigger shows probably. But if there’s any opportunity to run a Late Model I’ll probably take it.”

While his long-term future in the Late Model division is uncertain, for now Long is focused on the difficult task of competing against the World of Outlaws this weekend. While just making the feature lineup is his first goal, Long has his sights set on a solid finish in the 50-lap event.

“The goal right now is to make the show,” Long said. “With how good we’ve been running, I’m pretty confident we can do that. If we do get in, I’d feel pretty happy if we can get up there and finish in the top 10.”

• With his Sept. 7 victory at Skyline Speedway in Stewart, Ohio, Chris Garnes of Evans, W.Va., notched his 16th AMRA-sanctioned victory of the season.

• Willamette Speedway in Lebanon, Ore., went back to its outlaw-rules roots at least for one night with Jimmy Schram of Vancouver, Wash., winning the Sept. 8 special event.

• With his fifth victory at Potomac Speedway, Kenny Moreland of Waldorf, Md., wrapped up the Late Model championship at the Budds Creek, Md., oval.

IMCA: Ray Guss Jr. of Milan, Ill., edged Todd Cooney by a single point to wrap up his third consecutive weekly crown with the Iowa-based organization.

NeSmith Chevrolet Series: With his 13th victory of the season Friday night at Hattiesburg (Miss.) Motorsports Park, Chase Washington moved into a tie with Mickey Trosclair at 796 points after week 24. In a top five separated by just six points, Ryan King is this third at 792 with Jeremy Shaw and Duke Palasini tied at 790.

Among non-touring and independent special events at dirt tracks around the country coming up this weekend: