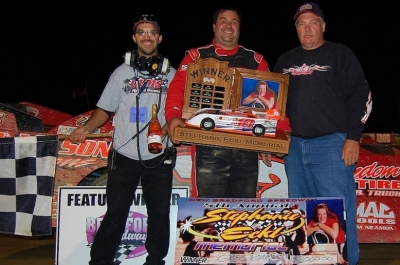 Mike Knight of Ripley, W.Va., and Bob McMillen of St. Marys, Pa., started the race from the front row with Knight pulling ahead over McMillen and Billy Dickson on the race’s initial start. | Slideshow

Dickson swept into second on lap four with Brady Wonderling following him into third before Dave Hess came to a stop in turn three on lap six to cause a caution.

Dickson and Wonderling applied heavy pressure to Knight following the restart until the race was again slowed with 10 laps complete when Jason Dupont came to a stop on the backstretch after he and Bob Close traded paint.

Knight re-fired the field, but the high-running Dickson slapped the turn four wall hard to bring out the caution just one lap later, handing second to Wondering and moving the 10th-starting Oakes up to third.

Knight, Wonderling and Oakes were rim-riding around the quarter-mile oval until DuPont brought out the yellow on lap 20. Oakes got by Wonderling on the restart and set his sights on the still high-running Knight.

Oakes pulled alongside Knight several times but couldn’t a run strong enough to take the spot.

Lap 39 saw disaster for Knight as he dropped out with an apparent blown engine, ending his run and giving the lead to Oakes.

Oakes restarted the field with the recovering Hess back up to second after his early problems. Hess tried to keep pace with Oakes and let the sparks fly as he scraped the turn-four wall.

A debris caution set up a late dash to the finish, but Oakes held off challenges from Hess and third-running Matt Lux of Franklin, Pa., to score the victory. Hess settled for the runner-up finish with Lux taking third ahead of Boom Briggs of Bear Lake, Pa., and McMillen.