Lathroum edges Covert to win King of the Knob 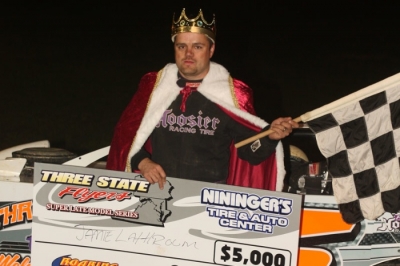 Jamie Lathroum was crowned King of the Knob. (Tommy Michaels)

MARKLEYSBURG, Pa. (Sept. 9) — Jamie Lathroum of Mechanicsville, Md., won a see-saw tussle with Jason Covert of York Haven, Pa., on Sunday at Roaring Knob Motorsports Complex to capture the 15th annual King of the Knob for the second time in three years. | Slideshow

Lathroum earned $5,000 for the 55-lap victory on the Three State Flyers circuit that was postponed by rain Saturday, then pushed back another hour on Sunday by more wet weather. Covert was second followed by West Virginians Zack Dohm of Cross Lanes, Tim Senic of Elkins and Corey Conley of Wellsburg.

After Lathroum topped 46 qualifiers and won a heat race, the main event rolled with Dohm jumping to the early lead and staying up front for 16 laps. Lathroum worked his way to the front and took over on lap 17, but the first of five cautions appeared for a slowing Jared Miley on lap 21.

With lapped traffic hampering the frontrunners, Jason Covert began his march toward the front, breaking into the top five by lap 30. Covert wrestled the second spot from Dohm on lap 43, then set out to battle Lathroum. Covert slipped ahead on lap 45, but Lathroum went back out front for laps 46-47. Covert was ahead again on lap 48 when the final yellow flew for a turn-three tangle between Satterlee and Hawkins that knocked both drivers out of contention.

The green flew the final time for a seven-lap shootout with Covert ahead of Lathroum. Entering turn three, Lathroum shot low and slid in front of Covert as the forntunners made contact, but Covert gathered himself and stayed right with the leader. On the second-to-last lap, Covert tried setting up Lathroum for an outside pass while Dohm was just behind in third.

Covert couldn’t make the pass work, virtually pushing Lathroum across the finish line in settling for second. Lathroum headed for victory lane with the right-rear corner of his No. 6 crunched up.