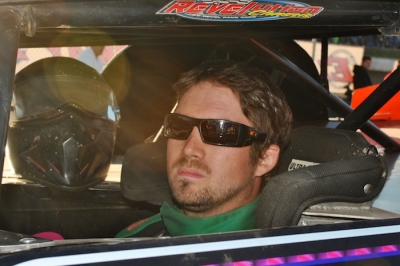 Michael Chilton was the top-finishing first-time driver in 10th. (DirtonDirt.com)

ROSSBURG, Ohio (Sept. 8) — While awaiting your first start in the World 100, it’s not easy keeping a handle on your nerves as the starting field forms on the frontstretch, the crowd begins to swell and driver introductions hit Eldora Speedway’s famous stage.

"It's just like any other race,” said 16-year-old Tyler Reddick moments before Dirt Late Model racing’s most prestigious event. "I just keep telling myself that — but I don't know if I believe it.”

• Michael Chilton of Salvisa, Ky., became the first Revelution Race Cars driver to make the event and finished 10th to top all the first-timers.

• Chad Simpson of Mount Vernon, Iowa, led 30 laps and was on his way to a top-five finish until he broke an axle with nine laps remaining.

• Billy Moyer Jr. of Batesville, Ark., joined his six-time race-winning father in the starting field, making them the second father-son combination in the race same after the late Johnny Johnson and Jay Johnson (1990, ’93).

Hotovy admitted he was nervous in starting a crown jewel that included previous race winners Birkhofer, Moyer, Scott Bloomquist, Steve Francis, Dale McDowell, Shane Clanton and Dan Schlieper. But he was able to complete 98 laps and was still running at the finish on a day when the two-day event was condensed to a single day because of Friday rains.

“It was nerve-wracking. Once you get through the nerves and stuff and get out there, I guess I (went through) the same thing everybody else does,” he said. “It’s fun. You learn a lot about your car and yourself ... when you’re out there that long. That’s the first 100-lapper I’ve ever ran. I just tried to stay out there the whole time to try to stay out of trouble and just keep going.”

Chilton came the closest of the seven first-timers to finish on the lead lap as he was overtaken by Birkhofer in the race’s late stages. But the 26-year-old Chilton stayed steady enough to be the best-finishing rookie.

“I was pretty amazed. It was just mind-blowing ... everything went right,” said Chilton, who was glad rain wiped out his Friday night time trial. "We had a horrible qualifying lap (Friday) night, and the rain let us get another lap. We put in a good lap, and hit the invert perfect and got to start on the front row (of a heat). I couldn’t ask for no better.”

It could’ve ended a little better for Unzicker, who got crossed up on the backstretch and left the race on the 53rd lap after he’d already gone a lap down. But he was still glad for the opportunity.

“Me and another guy were sliding back and forth and coming off of (turn) two I just got a little too high in the marbles, broke my traction, then it kind of spun me around and I collected the left-side wall. ... It was a pretty hard hit,” Unzicker said. "I was just glad to make the show. I didn’t really want to tear up my car, but oh well.”

Reddick, Simpson, Reaume and Moyer were among other disappointed rookies who weren’t around at the finish. Reddick’s car had rear-end issues and other mechanical bugaboos that plagued him during the weekend, but he still managed a heat race victory that put him on the front row of the crown jewel event.

“It’s really exciting to come up here for the first time and not only make the World 100, which I was sure we could, but sit on the front row, which I wasn’t expecting,” Reddick said. "I’m kind of disappointed (that) stuff broke after how fast of a car we had. You never know. It might’ve been us in victory lane if our stuff hadn’t have broke. That’s just how it is.”

It was the pole-starting Simpson who turned out to have the best shot at victory lane after taking the lead from Reddick on the third lap. Simpson led until Birkhofer stole the lead on a lap-32 restart, but Simpson stayed among the frontrunners for the next 60 laps until his broken axle doomed him. It was a run he knew he could eventually make at Eldora, where he’d failed in four other attempts to make the World 100 or Dream starting fields.

“We just needed everything to click and go in place for us where we could run the heat race and run good, run the feature, and try to get 100 laps in,” he said.

Reaume didn’t quite make the finish either, falling out on the 92nd lap after Chris Madden spun between turns one and two and collected the onrushing Canadian.

“You know what? When I saw 91 laps (on the scoreboard), I thought ... I think I’m going to make all 100 laps,” he said. "I think I could’ve gotten by Eddie Carrier and maybe Shannon (Babb) there. I had to hit my marks perfect to keep up with those guys, but just to be running with that caliber of guys, I’m pumped.”

Billy Moyer Jr. was pumped too in running a race with his dad, even though he ended up retiring after 64 laps.

“Making the show’s the first thing you’ve gotta go at a joint like this. We’ve only been here twice. This is only my second World 100, and to get in this thing means a lot,” the 24-year-old Moyer said. "Hopefully we can keep making it for the next five years or whatever, then in five years we’ll be a contender and standing up there on that stage when them flames go off.”