Hustling Birkhofer's back on top of the World 100 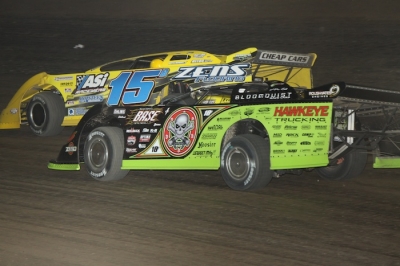 ROSSBURG, Ohio (Sept. 8) — Ten years later, Brian Birkhofer is back on top of the world.

A decade after capturing the prestigious DIRTcar UMP-sanctioned World 100 at Eldora Speedway for the first time, the superstar driver from Muscatine, Iowa, returned to the spotlight on Saturday night with a dominant march to victory in Dirt Late Model racing’s biggest event. | Complete World 100 coverage

Birkhofer’s triumph was worth $50,000, including a $5,000 bonus added to the first-place prize on Saturday by Mark Larson of Rock Rivers Arms in Colona, Ill.

“Who would’ve thought 10 years ago I won and here we are again,” said Birkhofer, who became the seventh driver to win the World 100 at least twice in the race’s 42-year history. “It feels good to get back in victory lane. I’m in awe that I have my name on this (World 100) shirt a second time and I have a new globe (trophy) to put right by my big TV tomorrow night when I watch the (Pittsburgh) Steelers.”

Birkhofer, 40, inherited the lead on lap 35 when Don O’Neal of Martinsville, Ind., blew up a transmission and never looked back. He built an edge of over a straightaway before three late caution flags tightened the field and shrank his winning margin to a more modest 2.570 seconds over Scott Bloomquist of Mooresburg, Tenn. — the same driver who finished second to Birkhofer in the 2002 World 100.

Saturday’s race was a stark contrast to Birkhofer’s unforgettable first World 100 win, which he secured on a slicker, slower track surface with a dramatic last-corner pass of Bloomquist that brought the packed house down.

Patience wasn’t a virtue this around for Birkhofer, who steered his MB Customs car from the eighth starting spot to fourth by lap 32 and vaulted up to second following the race’s first caution flag that same circuit. Billy Moyer of Batesville, Ark., was the cause of the caution when he slowed while running second place due to brake woes.

“How I used to approach this place is, you wait till 20 (laps) to go and then go for it,” said Birkhofer. “But now you hustle all the time. It’s all about racing hard. I’m not saying I’m comfortable doing it, but I guess we got it done tonight.

“The racetrack’s different than what it was 10 years ago. It’s definitely faster, and I’ve had to bring my level up a little bit different. When Earl (Baltes) had it back in the day, it would get about 19 seconds and it just don’t get that slow anymore — so ol’ Brian has to get up on the wheel more. I realized, if I’m gonna win here again, I gotta get aggressive.”

Birkhofer slipped into the lead without having to battle O’Neal, who simply fell off the pace and ceded the top spot on lap 35. The mechanical trouble ended what appeared to be a very formidable bid for victory by O’Neal, who started fifth and passed polesitter Chad Simpson of Mount Vernon, Iowa, for the lead on lap 33.

In fact, Birkhofer even acknowledged that O’Neal, 48, would have been difficult to overtake.

“Don O’Neal might have had the best race car, but he broke,” said Birkhofer. “It might have been a gift, but I’ll take it any day.”

Birkhofer never went into conservation mode the remainder of the distance, however. He stayed on the gas so thoroughly that Bloomquist, who slipped by Simpson for second on a lap-53 restart, fell a straightaway behind the leader by lap 60 and only was drawn close by a caution flag on lap 91 and two more on lap 93.

Birkhofer was more than ready for a showdown with Bloomquist, whose presence brought back memories of Birkhofer’s ’02 World 100 success.

“I seen the caution come out and I seen (Bloomquist) in second,” Birkhofer said. “I went down the backstretch (under caution) and I’m warming my tires up, and I actually looked up in turn three at the crowd and I thought, Man they’re getting ready to see something here. It’s been 10 years since me and this guy battled.

“I think it was great for the crowd. They got to see restarts and us battling it out. I don’t think you can have a better ending.”

Especially since Birkhofer maintained full control on the restarts, of course.

“I actually felt pretty good,” said Birkhofer, who car carried an engine built by Pro Power’s Bill Schlieper. “We had a restart and I looked over at my guy on the frontstretch and he kind of gave me that sign like I was pulling (away) after a lap. But with Scott it only takes one mistake and he’s by you.

“I gave him what room I needed to give him (on the restarts), and I said, ‘Brian, sail that baby in there.’ I just didn’t want to give Scott that clear run into (turn) three to slide me back.”

Birkhofer’s triumph came in his 12th World 100 start since he broke into the field for the first time in 1998. He’s only finished outside the top 10 three times, but a 26th-place finish in 2010 and a DNQ last year had him feeling uncertain about his abilities at Eldora.

“I actually contemplated not coming back here for just a year or two till I could come back and compete better,” said Birkhofer, who joined Bloomquist, Moyer, Donnie Moran, Jimmy Owens, Jeff Purvis and Larry Moore as a repeat winner of the World 100. “We didn’t even make the race last year, so it feels good to get back on top here.

“Who’s to say who would’ve won this if Don O’Neal don’t break, but we’ll take it.”

Bloomquist settled for his unprecedented eighth runner-up finish in 23 World 100 starts. He has also three wins and a total of 15 top-five finishes in the event, which he has failed to qualify for just twice since 1988.

Neat, 32, was the unlikeliest of third-place finishers. He qualified 90th-fastest because he smacked the outside wall during his time-trial lap and had to run a qualifying feature (which he won), and then he rallied to transfer to the World 100 by finishing second in a consolation race.

By the midway point of the 100-lapper Neat sat just outside the top 10. He was up to seventh when a caution flag flew on lap 91, and two laps later he surged to third on a restart.

Neat, who had never finished better than 12th in the World 100, crossed the finish line just over a half-second behind Bloomquist.

Lanigan remained winless in 19 career World 100 starts, tying Freddy Smith for the most appearances without a victory. He appeared to be in prime position to snap the losing streak when the qualifying invert put him on the pole of the fifth heat race, setting him up to earn the outside pole for the A-Main with a victory.

But a turn-three run-in with a lapped car cost Lanigan the lead midway through his heat and he never recovered.

In a race slowed by six caution flags, contenders who joined Moyer and O’Neal in falling by the wayside included first-time World 100 starter Simpson, who led laps 3-32 and sat third until moments before a broken axle eliminated him on lap 92; Jimmy Mars of Menomonie, Wis., who gave up fourth place to mechanical trouble on lap 92; and Chris Madden of Gray Court, S.C., who raced in the top 10 for most of the distance before retiring on lap 93.

Steve Francis of Ashland, Ky., finished sixth after running in the top five for most of the race’s second half. Brandon Sheppard of New Berlin, Ill., relinquished his 24th-place starting spot when he pitted on the race’s pace lap to bolt on a softer tire but charged through the pack to finish seventh in his second World 100 start, and Eddie Carrier Jr. of Salt Rock, W.Va., was the last driver on the lead lap at the finish in eighth. Fast-time provisional-starter Shannon Babb of Moweaqua, Ill., and World 100 rookie Michael Chilton of Salvisa, Ky., both finished one lap down in ninth and 10th, respectively.

Dale McDowell of Chickamauga, Ga., was fastest in Saturday afternoon’s time trials, turning a lap of 15.797 seconds to earn a $1,000 bonus from CM Graphics.

Time trials were pushed to Saturday afternoon — and reduced to a single lap — after rain struck Eldora on Friday night 45 cars into the 123-car qualifying session. All results from Friday were wiped out and qualifying restarted from scratch on Saturday.

Winners of the 15-lap heats were Chilton, O’Neal, Moyer, Bloomquist, Tyler Reddick of DuQuoin, Ill., and Simpson. The 20-lap B-Mains were captured by Shane Clanton of Fayetteville, Ga., and Ryan Unzicker of El Paso, Ill., whose spin into the backstretch wall on lap 53 of the World 100 was the race’s hardest crash.

Reddick, 16, became the youngest driver ever to start the World 100. He started from the outside pole and led laps 1-2 before retiring on lap 41 and finishing 24th.