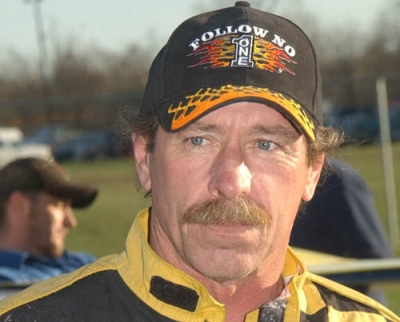 Long-time Sunoco American Late Model Series driver Hillard Miller is recuperating at home from serious facial injuries suffered when a piece of debris slammed into his helmet during the April 19 ALMS feature event at Eldora Speedway in Rossburg, Ohio. Miller was taken to a nearby hospital and then airlifted to Parkview Hospital in Fort Wayne, Ind., before being released Sunday afternoon.

"His face is pretty messed up," his wife Barb said in a telephone interview, describing the 52-year-old Defiance, Ohio, driver's injuries that included broken bones around his right eye, a broken nose, broken teeth and and a bitten tongue. "He told me he was racing, he saw something coming, and just that quick it hit him in the face. ... He said it felt like he lost his eye."

Miller's helmet and face shield were damaged by the debris, but Barb Miller said they aren't sure what struck her husband. There was so much blood pooled in his right eye socket it was initially difficult to determine the extent of the injuries, but the hospital in Coldwater, Ohio, sent him to Fort Wayne so an eye specialist could treat him, she said. His left eye is undamaged, except for bruising around it because of the broken nose.

"We think he'll be all right," Barb Miller said, adding that Hillard turned down pain medication and is sticking with Aleve. "He has to go back (Friday, April 25) and see an eye specialist and make sure everything's healing right inside.

"He didn't have a concussion, no brain injury or anything like that, which of course is important. As the swelling and stuff goes down and his eye heels, we'll be able to better determine the extent of his vision. He can see objects and things, but it's kind of fuzzy and blurry."

The Millers returned from Fort Wayne on Sunday afternoon and doctors advised Hillard to take it easy. He's taking time off from his job as shop foreman at Fort Defiance Construction & Supply.

Several members of the racing community, including drivers Dusty Moore and Troy Catterene, and Eldora director of operations Larry Boos, have called with well wishes, Barb Miller said. She's grateful for everyone's help on Saturday with taking care of the team's hauler and assisting them through the emergency. "When something happens," she said, "you find out how big your family is in the racing world. It was a big relief for Hillard and I both, knowing that things were OK."

Miller is a five-time winner on the ALMS circuit with his last victory coming Sept. 13, 2003, at Fremont (Ohio) Speedway. His best finish in the series point standings is fourth place on three occasions, most recently in 2005.