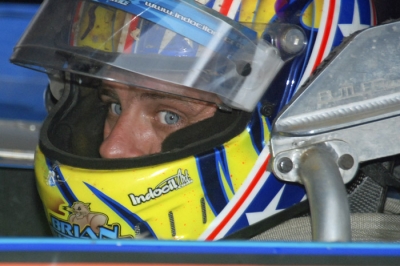 Brian Shirley is hoping to go where no man has gone before this weekend at Eldora Speedway.

If Shirley can find a way to capture the 42nd annual World 100 on Saturday night, he would be in position to pull off an unprecedented UMP DIRTcar hat trick – winning the circuit’s biggest race, most high-profile touring series (Summernationals) and most important points title (weekly championship) in a single season.

Shirley, 31, of Chatham, Ill., already has this year’s Summernationals Hell Tour crown in his back pocket and he holds a solid lead in the organization’s national points standings with five weeks of points competition remaining. So it’s the World 100 — the $45,000-to-win Granddaddy of Dirt Late Model racing — that stands as the primary hurdle between him and dirt-track immortality.

“It would definitely be a dream come true to win all three (major DIRTcar UMP prizes) in one year,” said Shirley, who began driving a Dirt Late Model in 2002 after his promising career as an American Motorcycle Association flat-track racer was cut short by an injury. “You couldn’t ask for anything better than putting your name in the history book like that. We’re just blessed that everything’s gone our way this year to give us an opportunity to do what we’ve done and maybe pull off something no one has ever accomplished.”

Defeating the most star-studded dirt Late Model field of the season — at perhaps the most famous and intimidating half-mile oval in the country — will be a supreme challenge for Shirley, who has not scored a top-five finish in a crown-jewel event at Eldora. But he enters the World 100 with plenty of confidence about his chances for success.

Shirley has tasted victory at Eldora, albeit on a smaller scale. He won the 2010 DIRTcar UMP Nationals, the circuit’s annual points-season-ending event that has provided him very valuable tours around the high-banked track.

“Going there for the (UMP) Nationals has really helped our Eldora program a bunch,” Shirley said. “We learn a lot from those extra laps, and it’s a reason why we have been able to make the races at the Dream and the World now on a pretty good program. We’ve won a couple heat races now, and we’ve won a B-Main. We’ve put ourselves in contention. But besides that sixth-place finish (in the ’08 World 100), we just haven’t done the right things in the feature.

“It’s all about experience,” he continued. “You can’t explain to people enough that experience means so much when you’re going against the caliber of drivers that are at Eldora. So many of them guys have been racing there so long and understand 100-lap races better than I do. We’re so immature to them. We just don’t run a lot of 100-lap races, so it’s so hard to understand them. You just gotta be in ‘em and understand the agony of defeat.”

Shirley lived those words just three months ago during the Dream at Eldora. He won the event’s sixth heat race to earn the pole position starting spot in the 100-lap A-Main, but he was unable to take advantage of the opportunity. After running second to eventual winner Shane Clanton of Fayetteville, Ga., for the first 20 laps, he gradually faded from contention before retiring and placing 20th.

“To be honest, I was so heartbroken over the Dream, my confidence just went down,” said Shirley. “I was down in the dumps for a week or so before my wife (Shannon) kicked me in the ass and told me to get up and go show everybody that it wasn’t an accident that we won a heat, started on the pole and ran up front early.”

Shaken from his Eldora hangover by his better half, Shirley headed out on the Summernationals one week later and promptly caught fire with spectacular assault on the grueling Hell Tour, winning the $25,000 title on the strength of five wins, 21 top-five and 22 top-10 finishes in 28 events.

“It was because of my wife that we turned things around for the Hell Tour,” said Shirley. “She gave me the confidence to believe in myself. She made me realize that even though we didn’t do good in the Dream as far as the feature was concerned, there were 80 other people who went home without even making it.”

Shirley’s recollection of the 2012 Dream was soothed even further when he recently found a previously undetected problem with the car he drove in that race, a brand-new Pierce machine that he built with bigger tracks like Eldora and Knoxville (Iowa) Raceway (the site of his career-highlight win in the 2006 Knoxville Late Model Nationals) in mind.

“We were lucky enough that we didn’t have to use the (new) car this summer on the Hell Tour,” said Shirley, “and when we started working on it (last week) to get it ready for the World we found that we had a right-rear shock broken. We realized we weren’t as bad as we thought we were in the (Dream) feature. There was a reason we didn’t have a handle on the situation in the big race.

“That proved to me that sometimes we have to do a better job at diagnosing the situation when something does happen. When you think you have a good car and then, all of a sudden, it goes to hell, you think it’s you and whether you did the right things. You start second-guessing yourself. But really, you have to look into the situation a little better. It’s a race car, and there are thousands of mechanical issues that can happen to cause a problem.

“I’m definitely not saying we would have won the (Dream) by no means,” he added, “but I think if we didn’t have that shock go bad it definitely would’ve saved us a top five or a top 10, which would have been a respectable finish. That’s a positive we can take back to Eldora.”

Shirley will head into battle at Eldora this weekend with his car at full strength once again — and his hopes of holding the coveted World 100 globe trophy riding high.

“It’s hard to describe how much we think about that race daily,” said Shirley, who will bid to become just the second driver to win the Summernationals and World 100 in the same season, joining legend Billy Moyer of Batesville, Ark. (1994). “Like any racer, I probably think of races at Eldora more than any other race we go to. There’s just so much prestige there.

“We’re so looking forward to trying to put our name in the record books there. And I’d like to get a World 100 win obviously for everybody in Illinois. An Illinois guy hasn’t won it yet (Moweaqua, Ill.’s Shannon Babb crossed the finish line first in 2005 but was disqualified for weighing in light), so I’d love to be the first and make everybody back home proud.”