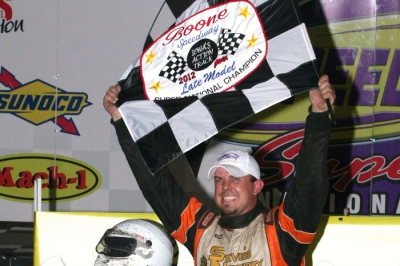 Mike Murphy Jr. shows off the checkers after his 22nd-to-first victory. (Barry Johnson)

BOONE, Iowa (Sept. 3) — Once he got to the front, Mike Murphy knew he had to protect the bottom.

He did both, and as a result the Late Model driver from Colona, Ill., became the first champion crowned at the 30th annual IMCA Speedway Motors Super Nationals. | Slideshow

Murphy started 22nd in Monday’s Deery Brothers Summer Series main event after winning his consolation race. He was running second by lap 14 and took the lead for good on the 34th of 50 laps after Jason Utter’s otherwise exceptional run came to a halt on the top of turn three at Boone Speedway.

Andy Eckrich led early on, restarted in the rear after getting together with a lapped car on the 13th circuit and raced his way up to second. Eckrich pulled within a car length as the race wound down before Murphy put some distance on to take the checkers comfortably ahead.

“I couldn’t believe that I didn’t get involved in any of the early yellows and that I was able to get through lapped traffic. It was one of those meant to be,” Murphy said. “From the race here on Memorial Day, I knew I had to protect the bottom late in the race. I didn’t want any of those guys to fly by me.”

“With the prestige of IMCA, this is the race to win,” he said. “It’s pretty neat to be able to add my name to the list of champions.”

DeFrance started on the pole and led the first two laps before giving way to Jason Hahne. Utter took charge on lap five and brought Hahne and Eckrich along in pulling away from the pack, Eckrich edged ahead in lapped traffic but restarted at the back after the frontstretch miscue on lap 13.

Utter and Murphy crossed the stripe in a virtual dead heat before Utter’s night ended early. Aikey, Craig Jacobs, Guss and DeFrance all did their best to stay close but none could find a way to challenge for the lead.

Joel Callahan was also involved in an early-race incident, restarted at the back and charged back to eighth.

Notes: Murphy's No. 14 is sponsored by Sherri D's Auto Sales, Riverbend Pizza Place and Rock River Arms. ... Murphy had qualified for the main event at Boone once before, finishing ninth in 2006. ... Darrel DeFrance started on the pole in his 401st consecutive Deery event and received numerous contingency awards, including a set of heads from Brodix. ... Andy Eckrich was the $250 Sunoco Race Fuels feature qualifier-drawing winner. ... Thirty cars started the Labor Day headliner. It’s the first time any Deery race has started three wide and 10 deep. ... Seven drivers made their career first Super Nationals main event starts on Monday, among them Willie Gammill, the first driver from Arkansas to qualify for the Late Model show.