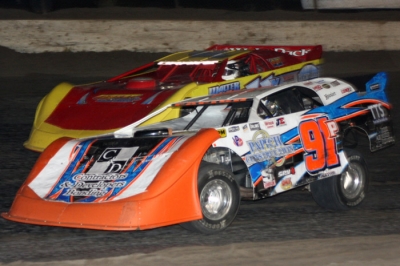 Papich topped many of California’s top Dirt Late Model racers for the prestigious victory, realizing he had no room for error in the caution-free feature.

“I thought they would be there,” Papich said. "I was waiting to be pushed out of the way.”

Pole-starting Steve Drake of San Luis Obispo, Calif., jumped into the early lead with Papich challenging from the outset. Papich worked his way into the lead on the fourth lap and built a comfortable lead before lapped traffic allowed Drake to close in.

Mike Johnson, Rob Sanders and Papich’s teammate Tony Toste were in pursuit as the frontrunners worked through the slower cars. Papich stayed in control, taking the checkers over Drake, Johnson, Sanders and Toste at the checkers at the third-mile oval.