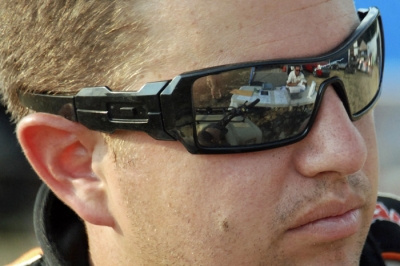 Steve Casebolt happily recalls a trip to Eldora Speedway for the 2007 Dirt Late Model Dream. That particular visit to the famed half-mile oval in Rossburg, Ohio, produced the biggest victory of Casebolt’s career when the Richmond, Ind., racer drove a Dale Beitler-owned race car to a $100,000 victory in one of Dirt Late Model racing’s biggest events. | Complete World 100 coverage

Unfortunately for Casebolt, his career-defining triumph in ‘07 is one of the few fond memories he’s made on Eldora’s high banks. Most of his other memories of races at Eldora are ones of disappointment and frustration.

The 34-year-old racer would like nothing more than to change that this weekend when he heads to Eldora for the 45th annual World 100. But that doesn’t mean he’s in any hurry to get there.

“I just find it kinda hard to get pumped up to go to Eldora. It’s not that I don’t like the place. I love going up there and the Dream and the World are big races for me,” Casebolt said of Eldora’s two biggest events. “It’s just man, I know I’ve won there, but from there on out, my results haven’t been too good.”

Casebolt’s relationship with Eldora is without a doubt one of love and hate. Besides his Dream victory, Casebolt has made just four other feature lineups in either the Dream or the World. He has an average finish of 15th in those four starts with just one top 10, an eight-place effort in the 2000 Dream.

“I like going. Don’t get me wrong,” Casebolt said. “But usually on Sunday when I’ve been at Eldora for three days, I wake up wondering ‘What have I just done? I wasted three days and spent all kinds of money and here I am.’ Maybe this year will be different. We’ll be there again to try and see if we can’t at least make it in the race.”

Unlike his other recent trips to Eldora, Casebolt has reason to believe that this weekend could be different. After a disappointing year in 2011 and a brief retirement over the offseason, Casebolt came back to racing with a new approach and a new attitude in May, and the changes have paid off.

After following the Lucas Oil Late Model Dirt Series full time for a number of years, Casebolt has cut back to a more selective schedule this season and has performed his best since perhaps his Dream-winning season in ’07, a year that also produced two of his three Lucas Oil Series victories.

While his results may not completely reflect the improvement, Casebolt has been much more competitive this year. After just one victory last season, Casebolt has scored three victories while racing on a much slimmer schedule this year, including back-to-back $5,000 victories Aug. 17-18 at Moler Raceway Park in Williamsburg, Ohio, and Portsmouth (Ohio) Raceway Park.

Aside from another missed feature at the Dream in May, Casebolt has been solid in most of the major events he’s entered this year. In just his second race back from his brief retirement, Casebolt posted a solid third-place finish in World of Outlaws Late Model Series action at the $25,000-to-win Jackpot 100 on May 26 at Tyler County Speedway in Middlebourne, W.Va. Three months later, he backed that up with another third-place finish in the Lucas Oil-sanctioned, $50,000-to-win North-South 100 at Florence Speedway in Union, Ky., on Aug. 11.

“Right now, our car’s just fast,” Casebolt said of the MasterSbilt Race Car he purchased at the beginning of the season. “When you have a fast race car, a lot of those frustrations we’ve had over the past few years, they just go away.

“I’ve been in the MasterSbilts a little over a full year, and I feel like I’m just now getting comfortable making the right decisions at the right times. I’m just now getting some setups in my notes that I really like. I’ve finally got some stuff to go back on, and my car’s just been really consistent. Everything just seems to clicking a lot better right now.”

Casebolt’s change in approach hasn’t only affected his on-track performance. It’s also made his racing more enjoyable. He’s even found himself staying more upbeat after disappointing outings, such as this past weekend when Casebolt dropped out of two events during a doubleheader weekend at Portsmouth (Ohio) Raceway Park while battling up front in both races.

“It seems like I’m just not pressuring myself now, so it’s really just coming a lot easier for me I think,” Casebolt said. “We’ve had a handful of poor runs this season and some bad luck, but overall, I haven’t been discouraged much so far this season. That’s a big part of it, is being happy and having fun with it.

“Nobody likes to go out and lose. I don’t mind not winning every weekend. It’s just those weekends you go out and you’re just terrible ... that’s the stuff that really gets me down. At least we’ve been pretty competitive this year.”

Casebolt can only hope that his improved performance will eventually translate to more success at Eldora. He hopes that success come sooner rather than later, preferably this weekend.

But having a fast race car isn’t the only prerequisite for Eldora success. As Casebolt well knows, it can often take having a number of things fall your way just to make the feature lineup, let alone to win the race.

“The World 100’s a big race and one everybody wants to win, me included. But there’s just so many factors that go into running well at Eldora. I don’t think I really have all that under control. I need to improve on my qualifying and get up there in the front row of one of those heat races.

“I think if we could just make it in the race, it’d be different. But I just never have any luck getting in the race. But if we could actually make the main event, I feel like I can drive around that place well enough and I can be consistent enough and patient enough to get up through there. But it’s the hard part for me, getting in the main event.”

Even if Casebolt makes the show, winning wont be easy. He’ll be up against one of the most competitive fields of any Late Model race and facing it with a self-owned race team that isn’t anywhere near the level of Beitler’s team he won the Dream with in 2007.

The smaller team gives Casebolt an underdog status that would make winning at Eldora again even more meaningful this time around.

“In all reality, there aren’t that many self-owned teams that get a chance to do well in the bigger races,” said Casebolt, whose equipment arsenal this season includes just one car and two engines. “I mean, you have Billy Moyer and Scott Bloomquist and other guys that own their own stuff. But I’m a little bit of a smaller operation. I don’t have any full-time crew help or anything. So yeah, it’d be huge for anybody like myself to go up there and win.

“Either way, one of the toughest things to do is to go and run well at Eldora. Even if you can get up front, you still have to run those 100 laps and fight off the best in the business. But if you can win it, you’ve done something no matter what equipment you’re in."