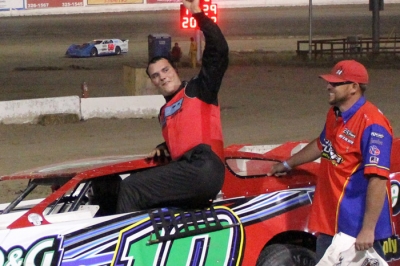 John Hansen emerges after his victory at Aztec Speedway. (www.facebook.com/Crimson.n.cream.photo)

Starting from the poll, Hansen jumped ahead on the start of the race and never looked back, leading every to top hometown driver Garrett Higgins, who earned his career-best finish on the regional tour. Garrett Alberson of Loz Cruces, N.M., finished third with hometown driver Andy Hockenhull and Brad Shelton, also of Fort Morgan, rounding out the top five.

With his third-place effort, Alberson retook the series points lead from Scott Lewis of Henderson, Colo., who ended up 22nd in the final rundown after dropping out early.

The CLMA tour returns to action Sept. 21-22 with a doubleheader weekend at Diamond Mountain Speedway in Vernal, Utah.