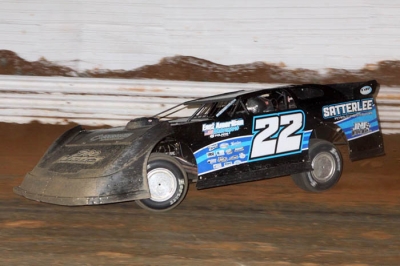 Satterlee, who dropped out while running second in Friday’s weekend opener at Bedford (Pa.) Speedway, took the lead on lap 19 of Saturday’s race and never looked back en route to a $3,333 victory, his first at the half-mile oval.

Rine, last year’s race winner, started on the pole for the prestigious 33-lapper and took the lead at the start with fourth-starting Jason Covert of York Haven, Pa., in pursuit.

Satterlee, who started seventh in the field as the current series point leader, was already up to third with four laps complete.

Rine entered traffic after about 10 laps, and the race's first caution flag unfurled on lap 12 for Jason Covert’s faltering engine. That put Satterlee on Rine’s rear bumper for the restart.

Satterlee worked the inside line to perfection over Rine, but Rine was not easily denied as the pair repeatedly raced side-by-side for the lead until Satterlee finally pushed his No. 22 out front on the 19th circuit.

Another caution with eight laps to go set the stage for a torrid battle to the finish for second between Rine, Lupfer and the 15th-starting Miller.

While Satterlee drove away over the final distance, the trio electrified the fans with a pleasing battle for the second spot. Rine held off Lupfer and Miller until the final mile when Lupfer’s bottom groove finally gave him enough of a push to allow him to take over the runner-up spot.

Notes: Satterlee’s Rocket Chassis is powered by a Roush-Yates Engine with sponsorship from Satterlee Petroleum Distributors, East American Motorsport, Integra Shocks and JNJ Motorsports Media. … Lap money pushed Satterlee’s earnings to $3,828. ... Jeff Rine picked up nearly $600 in lap money. ... Satterlee, who has won three out of the past four Flyers events, has 11 overall victories on the season. … The race opened the 158th annual Juniata County Fair. ... The series was scheduled to wrap up its Labor Day weekend tripleheader on Sunday at Hesston (Pa.) Speedway, but that race was rained out.