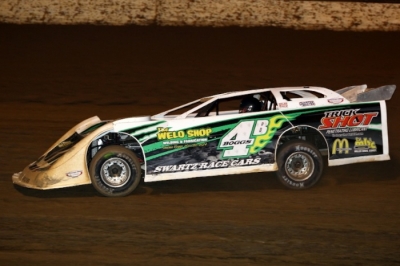 Boggs appeared headed for victory in Friday night’s unsanctioned feature at Portsmouth before losing his right-rear wheel with 10 laps remaining. Things looked much the same Saturday night, only nothing slowed Boggs down this time as he raced to a flag-to-flag victory at the 3/8-mile oval.

“We broke the center of that wheel last night, but we learned from that wheel, learned to check ‘em a little closer,” said Boggs, whose previous Lucas Oil Series victory came at the Dirt Track at Charlotte in 2005. “It ranks really high to come in and race with the caliber of cars that’s here tonight. The Lucas series is the toughest in the world.”

Grabbing the lead from the pole, Boggs turned back challenges from Davenport on a series of early restarts and pulled away from Bloomquist after the race’s final caution with nine laps remaining.

“We knew the zero car was back there and Davenport,” said Boggs, a former track champion at Portsmouth. “We just never give them an opportunity. It’s important to lead here. So we just had to run it as hard as we could run. I knew we had nine laps left, so I said just stand on it and drove it as hard as it would go for the last nine laps.”

The race was slowed by nine cautions, erasing the comfortable leads that Boggs built throughout the 50-lapper. But the cautions worked well for the leader, who was conserving his softer-compound tires as the track began to take rubber.

“They fell in my favor,” Boggs said of the numerous yellow flags. “I seen the black come in and the tires I choose wasn’t for the black. I should’ve been one notch harder on the right-rear, but it worked out for us.”

Bloomquist, who won both Lucas Oil Series events at Portsmouth last season, advanced to second late in the race and closed in on Boggs at times. But the cautions worked against Bloomquist, who said his harder tires needed more laps to get going.

“There was a time period in the race where we were a little bit quicker. Then the caution would come out and we were two tenths slower again, and he’d get out away from us,” said Bloomquist, who has just three series victories this season hasn’t won on the tour since early June. “You never know how many cautions there’s gonna be. That’s the kinda year we’ve had.”

Notes: Boggs drives a Jay Dickens-powered Swartz Race Cars that’s sponsored by Trick Shot, Miller Brothers Construction, The Weld Shop, McDonald's and CMW Racing. … Steve Casebolt of Richmond, Ind., who also broke while leading Friday night’s race, slowed while running fourth early in Saturday’s feature. … Steve Francis of nearby Ashland, Ky., battled Davenport for second throughout much of the race but slowed to bring out a lap-34 caution. … Friday's winner Brian Birkhofer was never a factor in finishing 21st. ... Portsmouth welcomes the Lucas Oil Series back Oct. 19-20 for the $50,000-to-win Dirt Track World Championship. ... The series moves to I-77 Raceway Park in Ripley, W.Va., on Sunday for the $25,000-to-win Hillbilly 100.