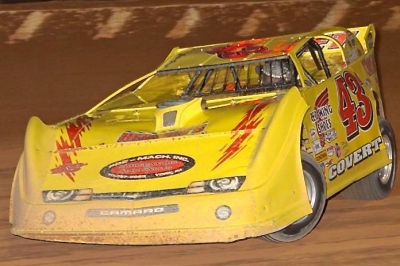 Starting from the outside of the front row, Covert jumped into the lead at the start and although threatened was never headed. Three cautions for minor incidents dotted the first three laps, and three more followed during the early going. But Covert zipped away from Haus on every restart.

David Williams of Charlotte Hall, Md., roared from the pack to chase down Haus and took over second on lap 15. He looked to be the equal of Covert until his car broke on lap 22.

Haus retook the second spot, but he was not secure as series points leader Gregg Satterlee of Rochester Mills, Pa., arrived on the scene from his 16th starting spot by lap 23. After seven laps of challenge, Satterlee took second and appeared to be closing on Covert with each passing lap.

But like Williams before him, Satterlee also fell victory to attrition when his own car broke on lap 35, bringing out the race’s final caution.

Covert again shot away from Haus on the restart as Haus turned back challenges from Hubbard. Covert reached heavy lapped traffic with six laps remaining, allowing Haus to closed in noticeably. Haus made it close, but the laps ran out before he made a move as Covert scored the victory.

Notes: Covert’s Rocket Chassis is powered by a Hershey Racing Engine with sponsorship from Pre-Mach Inc., Red Wing Shoes, Lias Tire and Baker Carburetion. … The victory was Covert’s second of the season on the tour. His first came Aug. 3 at Thunder Valley Raceway in Central City, Pa. … Drivers not starting the main event: Eric Zembower, Derek Byler, Matt Howsare and Rick Elliott. ... Satterlee led Jeremy Miller by 80 points entering the event while Covert was third, 148 points out of the lead. … Covert and Satterlee combined to win all four of the tour’s race held in August. … The Three State Flyers tour visits Port Royal (Pa.) Speedway for a $3,333-to-win event Saturday and wraps up the weekend with a $5,100-to-win race at Hesston (Pa.) Speedway Sunday.