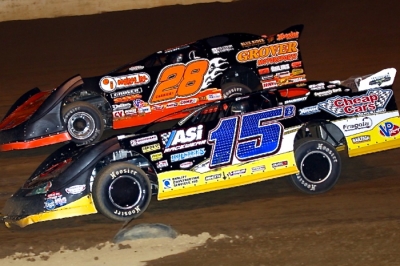 PORTSMOUTH, Ohio (Aug. 31) — Brian Birkhofer of Muscatine, Iowa, rallied from his 10th starting spot Friday night at Portsmouth Raceway Park and survived an attrition-filled race to kick off the holiday weekend with a $7,000 victory at the 3/8-mile oval. Slideshow | Video

Birkhofer grabbed the lead when Steve Casebolt of Richmond, Ind., suffered a broken oil line on lap 32 and led the remaining distance of the unsanctioned 40-lapper, which served as a tune up for the track’s Lucas Oil Late Model Dirt Series event scheduled for Saturday night.

Early leader Eddie Carrier Jr. of Salt Rock, W.Va., faded back as far as fifth but recovered to outduel Jared Landers of Batesville, Ark., for second in the race’s closing laps. Polesitter Doug Drown of Wooster, Ohio, was fourth while Nick Bocook of Wheelersburg, Ohio, finished fifth in a race that saw both Casebolt and Jackie Boggs of Grayson, Ky., fall out of contention while leading. Boggs led 16 laps before losing his right-rear wheel with 10 laps remaining.

“I told my guys we were third to fifth and just got lucky and won,” said Birkhofer, who scored his fifth overall victory of the season. “The car got better and those last five to 10 laps were the best it had been. But Jackie was hauling the mail and Casebolt was good. It was just a matter of we were at the right place at the right time. We kept all the tires on and kept the motor running at the end.”

Getting the jump on Drown, Carrier moved out front from the outside pole on the initial start and pulled the fourth-starting Casebolt along with him into second. Casebolt trailed closely behind Carrier with both drivers riding around the cushion on the top side of the track’s tacky, high-speed surface.

Drown and sixth-starting Boggs both closed in on the two leaders around the 10-lap mark with Boggs the only driver of the top four running the track’s bottom groove. Boggs moved by Drown for third on lap 11, and appeared to have run strong enough to move all the way to the lead before Casebolt jumped to the low side and moved by Carrier on lap 12 with Boggs pulling into second.

Casebolt’s first period out front didn’t last for long, however, as Boggs used a restart on the following lap to pull alongside. Boggs used a slidejob into turn three to pull ahead, but Casebolt crossed over to briefly retake the position exiting turn four.

The two leaders made contact down the front straightaway, with the front end of Boggs’ car lifting the rear of Casebolt’s off the ground. The contact caused Casebolt to slide high entering turn one, giving Boggs room to slip by for the lead.

Boggs established command in the following laps with Casebolt settling into second. Meanwhile, the low-running Birkhofer continued his run forward, breaking into the top five just before the race’s halfway point.

The battle was cut short on lap 32 when Casebolt’s race car began trailing heavy smoke, handing Birkhofer the lead and ultimately the victory.

Birkhofer noted that his triumph in the attrition-filled race was aided by his smooth drive to the front in a race where other contenders pushed their machines to the limits.

“It was hard racing, but I don’t know if we even put a scratch on the car,” Birkhofer said. “The track, it’s good but it’s choppy. You can get into trouble kinda easy, but we came through unscathed. … We were probably a third-to-fifth place car, but I’ll take the seven grand any day though.”

Carrier, who has enjoyed a solid season on the regional level this year, was disappointed to let a golden opportunity against top competition slip away.

“Whenever you race against these guys and this competition, if you starting on the front row you have to take advantage of that,” said Carrier, who has 10 overall victories this year. “We needed to be a little bit better. I think we missed a little on tires, but we were trying something.”

Landers, who rallied from deep in the field to contend late, admitted that he may have abused his equipment on his way to the front.

“I got to second but had used my stuff up and let Carrier get back by there at the end,” said Landers, a regular on the Lucas Oil Series. “But we couldn’t be more happy with a 17th-to-third. We needed the momentum for tomorrow night. We’ve got a good race car and we’ve done a lot to it. I think we’ll be good.”

Both Boggs and Casebolt were disappointed to fall short.

“It was definitely mine to loose," Boggs said. "I was real happy with the way we ran against the caliber of cars here tonight. I think if we could’ve held it together we would’ve been all right. But you don’t never know till the checkered drops.”

Said Casebolt: “I was crossing my fingers and hoping I’d get lucky, but I knew how hard I was being on my car. It just wasn’t meant to be, I guess. … I don’t know if I could’ve held off Birkhofer or not. We were gonna give it all we had.”