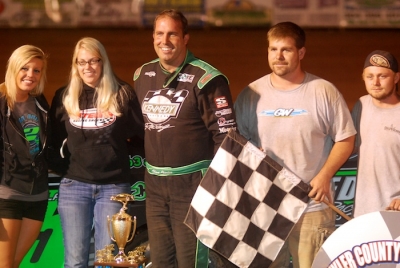 MIDDLEBOURNE, W.Va. (Aug. 31) — In doing a little late-night practice Thursday at Tyler County Speedway, Shane Clanton got an indication of how to prepare his Dirt Late Model for two big nights of action during the Black Diamond 125.

The Fayetteville, Ga., driver didn’t necessarily find a good suspension setup for slick conditions while practicing at the quarter-mile bullring, but at least he got pointed in the right direction with his No. 25 Capital Race Car. | Notebook | Video | Slideshow

"We tried a bunch of stuff last night — and we knew what not to do,” Clanton said Friday. "When we got to that condition tonight, we were a little better.”

That was good enough for Clanton to lead 50 laps Friday in the UFO Race Championship Series event paying $8,000, the first Late Model competition on a weekend with nearly $160,000 in purse money up for grabs. Friday’s victory tabs Clanton as one of the favorites for Saturday’s World of Outlaws Late Model Series event that includes a pair of $10,000-to-win semifeatures and a $20,000 finale.

Clanton started on the pole Friday and nabbed his first career victory at Tyler County, a small, high-speed track that’s not much like the Georgia ovals Clanton began racing on.

“It’s the way to start the weekend off where we ain’t been no good,” Clanton said. “It’s definitely gotten better every time we’ve gotten here, but it definitely feels good to start a weekend off on a big weekend, to win a big race.”

The pole-starting Clanton was never seriously challenged in a 50-lapper slowed by four cautions. Home-state drivers Jacob Hawkins of Fairmont, who started 10th, and Josh Richards of Shinnston, who started 11th, were good enough to reach the second and third spots, but neither had anything for Clanton. Another West Virginian, sixth-starting Tim Senic of Elkins, ran as high as third before settling for the fourth spot and Dan Stone of Thompson, Pa., improved nine positions to round out the top five.

Brandon Sheppard of New Berlin, Ill., the Rocket Chassis house car driver who was joined by Richards as a teammate, ran second early in the race but faded from contention with a vibration in the right-front corner of the car following a lap-33 restart.

Clanton was glad to find success at a track where he hasn’t finished better than seventh in his last three starts.

“I’ve always just been a little loose, and I think I’ve been doing the wrong adjustments at the wrong time during the night, and getting myself out in left field,” Clanton said. "Tonight we just made the right adjustments all night and we were pretty good.”

For the first half of the race, Clanton stretched his lead to a full straightaway, but he settled for keeping Hawkins at a safe distance of five or six car lengths over the final 15 laps.

“I think every time the racetrack cleans up and rubbers like that, everybody gets closer to the same speed and it’s harder to pass,” Clanton said. "I was just trying to maintain and not catch lapped cars and get into ‘em hot and heavy and wear my stuff out trying to pass ‘em, so I’d have something at the end in case somebody did get up on me.”

Hawkins, driving the Bobby Lake Motorsports car that his older brother Jared drove to a $20,000 victory in last year’s Black Diamond finale, drove under several drivers in rallying from his fifth-row starting spot.

“That’s where you had to get ‘em definitely was on the corner entry. You kind of had to slide ‘em, just everybody had their momentum up going around the outside there,” he said. "Finally the lane got moved down a little bit, but unless your car was a lot better, you kind of had to aggressively pass ‘em.

“Really I felt like I was getting good there for a while, and then we had a caution, and we got going, and we had a caution again, and it just seemed like my tire never did get going. Then the last four or five laps, the car felt like it started coming back in again, but it just wasn’t enough time.”

Richards said he overheated his tires in rallying from the 11th starting spot to finish third after battling with Hawkins and Senic through much of the race.

“The car was really, really good. I felt like if we could’ve started up front, we could’ve won. I wouldn’t have had to hurt my tires as much,” he said. "I had a good race with my buddy Jake — it was good racing with him.”

The drivers will return Saturday for World of Outlaws action with some big money up for grabs.

“I definitely think we can get better later in the racer, so maybe we need to tighten up a little bit more at the beginning so we’re good at the end,” Clanton said. "It’s two big races tomorrow night, so hopefully we’re there for both of ‘em.”

Notes: Clanton’s Capital Race Car is sponsored by Kennedy Partners Racing, Core Construction, Ironco and Keyser Manufacturing. ... Sixteen of 24 starters were running at the finish. ... Jimmy Mars pulled to the infield with a broken battery post that cut power to his No. 28. ... Cautions appeared on the first lap for a called back start, the again on lap 13 when Keith Barbara spun in turn one after apparent contact from Clanton. ... Brian Reese and Ray Cook tangled on the restart, causing damaged that forced both drivers to park their cars a few laps later. ... The final caution appeared on lap 33 when Steve Shaver slowed at the top of the frontstretch. ...ï¿½ Saturday’s Black Diamond 125 program will see the field split into two groups following time trials (odd-numbered qualifiers in one group, evens in the other) and a full racing card: 15-lap heats, 15-lap consolation races and 24-car, 40-lap semifeatures paying $10,000-to-win. ... The top-10 finishers in each preliminary feature will move on to the Talented Twenty finale, a 45-lap showdown that offers a $20,000 first-place prize. ... Forty-eight drivers are guaranteed to earn $1,000 in the format. .... Pit gates are scheduled to open at 2 p.m. and grandstand gates will be unlocked at 3 p.m. on Saturday. Hot laps are scheduled to begin at 6:45 p.m.