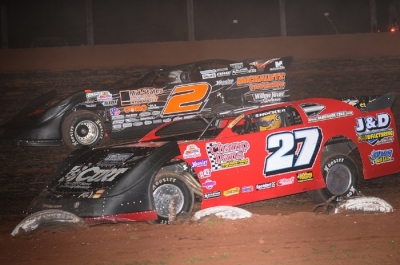 Smith earned $2,500 in purse money after starting outside the front row and outdueling Jake Redetzke of Eau Claire, Wis., and polesitter Zach Wohlers of Kelly Lake, Minn., for the victory at the 3/8-mile oval. | Slideshow

At the green flag, Wohlers, a rookie in the Late Model division, got the jump on Smith to take the early lead. The front-runners strung out over the opening laps with Smith six car lengths behind the leader and Redetzke another eight car lengths back in the third spot.

Wohlers closed on the back of the field and Smith and Redetzke caught up as the lapping process began. As expected, traffic became a factor as the three leaders began to find their way through.

Smith drew alongside Wohlers with Redetzke right behind and the trio went three wide in an exciting battle for the lead. At the half way point Redetzke had the lead by a fender but traffic continued to be a problem as Smith gained the point over Redetzke with Wohlers back to third.

Smith finally broke free of traffic as did Redetzke but the first caution flag of the event flew when debris was spotted on the track. The green flag flew with 14 laps remaining, only to have the car of Terry Lillo become hung up on the inside marker tires.

The next try at a start proved to be the downfall for Redetzke as a collision with another car caused him to run slowly off the backstretch and roll to a halt in turn three.

Kaanta moved by Wohlers and tried his best to run down Smith in the final laps, but Smith was too stout and became the fifth back-to-back winner in the 40-year history of the event.

Notes: Smith’s Bloomquist Race Car is sponsored by Big Red Motorsports, Mid-States Equipment Hydraulics, Michaeltz Trucking and Badger Storage and Excavating. ... Smith notched his fourth victory of the season overall and second in a row. ... He won Wednesday at Ogilvie (Minn.) Raceway in WISSOTA Challenge Series action. ... In addition to the purse money, $800 in lap money was up for grabs. ... While Proctor’s Late Model racing is over for the season, the track hosts an Oct. 6 enduro.