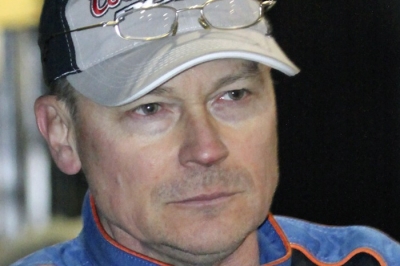 Ray Guss Jr. raced his way into IMCA the record book by the narrowest of margins. Guss, of Milan, Ill., bested Todd Cooney of Des Moines, Iowa, by a single point, 810-809, in becoming the first driver in the modern era of the division to win three consecutive national IMCA Late Model championships.

Bonus points are determined by average car counts at each track; bonuses are given for a maximum of one Late Model track championship and the highest average is used when drivers win more than one local track crown.

A 14-time feature winner this season, Guss added another Allstar Performance Illinois State trophy to his collection. He earned a $5,500 share of the $21,300 point fund that will be paid to top 20 finishers in the final divisional point standings, which become official on Sept. 24.

Cooney had a division-best 15 feature wins and was also track champion at the Iowa State Fairgrounds Speedway and at Stuart Speedway. The 1997 and 2002 national champion, Cooney’s added a career sixth Allstar Performance Iowa State championship as well.

Rounding out the top five in points this season were Tyler Bruening of Decorah, Iowa; Ryan Griffith of Webster City, Iowa; and Nate Beuseling of Silvis, Ill. Darrel DeFrance, who now shares the record of three career Late Model national championships with Guss, was sixth.

Rookie of the year honors went to Chuck Hanna, 19th in the national point race.

IMCA’s regular weekly season for Late Models ran from April 27 to Aug. 26. Point fund checks will be presented during the national awards banquet in Lincoln, Neb., in November.