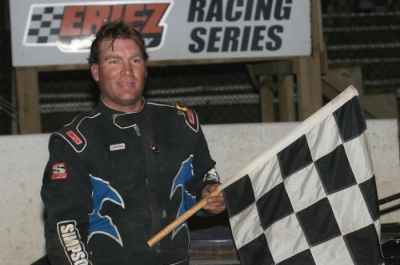 He took the checkers ahead of Dave Hess Jr. of Waterford, Pa., in the 23-car event. Dutch Davies of Warren, Pa., was third followed by series points leader Boom Briggs of Bear Lake, Pa., and Mike Knight of Ripley, N.Y.

Rich Gardner started on the pole with Hackett alongside, and Hackett jumped into the early lead with Gardner, Ron Davies and Knight in pursuit. The race was halted when tail-running Chuck Parker spun in turn four on the seventh lap.

Ron Davies moved into second on the restart with Hess up to third before a lap-12 yellow for Randy Sterling’s turn-two spin.

With Hackett still out front, Ron Davies got too high in turn two on the restart, losing two spots immediately, then falling out of contention altogether when he spun in turn four on lap 17, collecting Jason Dupont.

After another Sterling spin, Hackett opened a lead on Hess with Briggs and Knight just behind. At lap 22, Hess put pressure on Hackett as both frontrunners narrowly avoiding a spinning Dave Lyon.

Hackett kept Hess in check for three more laps before another yellow, then won the two-lap dash to the checkers for the victory.