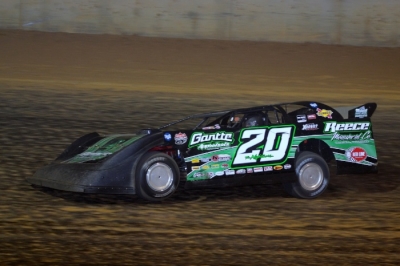 LAWRENCEBURG, Ind. (Aug. 25) — Escaping his only challenge with a well-timed caution, outside front-row starter Jimmy Owens cruised to an easy victory Saturday at Lawrenceburg Speedway, the series points leader’s fourth of the season on the Lucas Oil Late Model Dirt Series. | Video | Slideshow

Owens led all the way in the Whiskey City 50 to earn $10,000 and his first Late Model victory at the 3/8-mile oval, which drew a big crowd for the national tour’s annual visit. Owens became the fifth winner in five series visits.

“We hot-lapped good, qualified good, won our heat race and the car was just excellent all night long,” said the 40-year-old driver from Newport, Tenn., the tour’s reigning champion. "It came down to the feature, the track blew off a little bit, we was able to put the right tires on and lead the whole race.”

Owens took the checkers a straightaway ahead of Don O’Neal of Martinsville, Ind., his closest pursuer in the points chase. O’Neal took the second spot from John Blankenship of Williamson, W.Va., following a lap-36 yellow flag, the only stoppage in the 50-lapper.

Steve Francis of Ashland, Ky., picked his way from the 10th starting spot to finish fourth and former race winner Brian Birkhofer of Muscatine, Iowa, rallied from 16th to round out the top five. Polesitter Eric Wells wasn’t a factor in finishing ninth.

Owens got the jump on Wells and was all alone through the first half of the race while Wells, Jared Landers and Blankenship spent time in the second spot. Owens had a straightaway lead after 10 laps and kept lapped cars between his No. 20 and Blankenship’s No. 23 most of the time while O’Neal, Earl Pearson Jr., and everyone else mixed it up behind him on a track surface that slowed down and smoothed out after some rough-and-tumble preliminary action.

Blankenship cut the lead to a half-straightaway at the 30-lap mark, and began reeling in the leader the next half-dozen circuits. But just as he reached the rear deck of Owens in turn four, the race’s lone yellow flag waved.

It was officially for debris, but officials also took the chance during the caution period to replace infield tire barriers that had been moved, allowing competitors to dip into the infield and stir dust that hampered the Speed TV cameras.

On the restart, O’Neal and Blankenship both did their best to get underneath Owens, but within a few laps he’d slipped away again, building a lead the rest of the distance before winning by 3.5 seconds.

O’Neal said he thought he was going to be stuck with third place until the caution allowed him to outduel Blankenship to get runner-up status. “We just didn’t have nothing for the 20 car tonight,” he said.

Blankenship was left wondering what might’ve happened if the 50 laps ran caution-free as the series did two nights earlier at Volunteer Speedway in Bulls Gap, Tenn.

“It’s a lot better than we did last year (at Lawrenceburg). Last year, we crashed early in the race,” he said. "So I mean, we’re pretty happy with it, but I think we had a winning car, especially (during) the long green. Our stuff was real good. The caution came out just at the wrong time for us, and it took us too long to get going again.

“I definitely felt like I had a good shot at him. I was running him down and I could move anywhere. It looked like he was more or less having to stay in the middle. I’m not saying I would’ve beat him, but I think we had a good shot at it.”

As much as Blankenship didn’t want to see a caution, Owens welcomed it.

“I knew the traffic was kind of holding me up, and I figure maybe the tire selection we had, when we got behind them lapped cars, we just slowed down a little bit,” the winner said. "So I was really glad to see the caution and get a clean track in front me again.”

Notes: Owens drives a Mike Reece-owned Bloomquist Race Car with a Cornett Racing Engine and sponsorship from Reece Monument, Gantte Appraisals, Red Line Oil, FK Rod End and Sunoco Race Fuels. ... The night’s racing was sponsored by Sign-A-Rama. ... Owens gave his trophy to a young boy sporting one of his T-shirts. ... Owens has four series victories in 2012 and 33 for his career. ... Thirteen of 24 starters completed 50 laps. .... Eighteen were running at the finish. ... In the night’s first heat race, Scott Bloomquist gave up the lead with a flat left-rear tire, handing the lead to Eric Jacobsen, whose engine went up briefly in flames and forced him to the infield. ... Besides Jacobsen, among drivers failing to make the feature lineup was Robby Hensley, Jeff Simonton and Steve Casebolt, a two-race winner the previous weekend in unsanctioned action. ... Greg Johnson had problems with his No. 24H and ran a few laps in Simonton’s No. 20 after tagging the tail of the feature. ... Ripples in the track surface plagued drivers early on a fast racetrack, but slower speeds later in the night helped minimize the problems for the main event. ... Lucas Oil competitors return to action Labor Day weekend with a $10,000-to-win event Sept. 1 at Portsmouth (Ohio) Raceway Park and the $25,000-to-win Hillbilly 100 on Sept. 2 at I-77 Raceway Park in Ripley, W.Va.