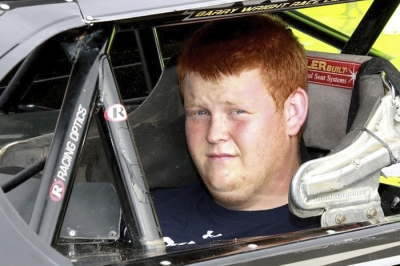 Christian Augspurger notched a $3,000 victory on Aug. 17 in Ocala, Fla. (Photos by Crawford)

When he raced Late Models during the late 1990s and early 2000s, David Augspurger never earned one of the over-sized paychecks often presented to a driver in victory lane after a special event victory. The now-retired Palm Beach Gardens, Fla., driver won plenty of weekly shows and even a track championship at Thundercross Speedway in 2001, but a special-event victory always eluded him.

So when his young son Christian found victory lane in Friday night’s unsanctioned special event at Bubba Raceway Park in Ocala, Fla., and hoisted the $3,000 winner’s check over his head, a proud father couldn’t help but to get a little emotional.

“I never got one of those big checks. I finished second and I finished third. But to see him lift that check up, it was really special,” David Augspurger recalled of his son’s victory lane celebration. “It meant a lot to us. It was just a really rewarding moment for all the work we’ve all put in.”

The breakthrough triumph was emotional for the driver as well. The 15-year-old Christian Augspurger was fighting back tears when he met his father in victory lane.

“It was amazing. I was almost in tears trying to get out of the car in victory lane and he was the first person there,” Christian Augspurger said. “It was really a great moment.”

Augspurger’s first special-event victory was as exciting as it was moving. The third-year Late Model driver battled veteran Florida racers Ivedent Lloyd Jr., Tyler Ivey, Jason Fitzgerald and Mark Whitener throughout the 40-lap race, and topped Whitener in a photo finish after a final-lap restart.

“I wasn’t real worried because our car was pulling really good on the restarts,” Augspurger said of the race’s green-white-checkered finish. “I knew he wasn’t gonna be able to get me down the back stretch, but I guess I slowed down a little in three and four. Plus they said he kinda dove off in there real hard. We bounced off each other a little down the frontstretch, but I came out on top.”

Outdueling Whitener and the other Florida standouts added to the excitement of the victory for Augspurger.

“It was huge to win this one. Beating the best Florida has to offer makes it even better,” Augspurger said. “It’s really cool to beat them all. Sometimes I’ll beat Mark or I’ll be beat Ivedent or Jason, but it’s something to beat them all when they’re all there.”

Augspurger’s big win is a major confidence booster for the young driver. He’s confident more victories will come as he continues to learn the ropes of Late Model racing.

“Before this week, we got to a point where we were finishing at least second, third or fourth pretty much every race,” Augspurger said. “I just needed to get to that next step where we could start winning races. Now I feel like I can win a couple more this year and even more next year and just keep getting better.”

• Stretching his win streak to four on Aug. 18, Matthew Nance of Ronda, N.C., has a $300 bounty on him at Friendship Motor Speedway in Elkin, N.C.

• Rallying from his 12th starting spot, Mike Murphy Jr. of Colona, Ill., was in the lead by the 10th lap and notched his fourth victory of 2012 on Aug. 17 at Davenport (Iowa) Speedway to solidify his points lead.

• After entering the season winless in Limited Late Models, J.R. Rodriguez of Dover, Pa., notched a victory Aug. 18 for the second week in a row at Susquehanna Speedway Park in Newberrytown, Pa. Rodriguez led the final two laps.

• On Aug. 18 at Port Royal (Pa.) Speedway, Derek Byler of Alexandria, Pa., notched his first career victory at the track.

IMCA: Todd Cooney of Des Moines, Iowa, used a victory and a runner-up finish over the Aug. 10-11 weekend to jump reigning champ Ray Guss Jr. of Milan, Ill., based on points through Aug. 11. Cooney leads Guss by just one point with Tyler Bruening of Decorah, Iowa, third, 22 points out of the lead.

ULMA: After earning his 10th victory of the season on Aug. 17, Jason Russell of Henley, Mo., holds a commanding lead with the Missouri-based Limited Late Model organization. He’s 96 points ahead of Joe Walkenhorst of Lee’s Summit, Mo.

WISSOTA: Chad Becker of Aberdeen, S.D., holds a scant two-point lead over two-time and reigning champ Ricky Weiss of Winnipeg, Manitoba, through Aug. 12 races. David McDonald of Huron, S.D., is third, 33 points out of the lead.

NeSmith Chevrolet Series: Earning his 10th win of the season, Chase Washington of Houlka, Miss., closed to a single point behind leader Mickey Trosclair of Luling, La., as the Crate Late Model organization’s season begins its home stretch. Jeremy Shaw of Millport, Ala., is third, only three points behind Washington.

Madison (Minn.) Speedway (Aug. 25): The WISSOTA oval hosts its only Late Model event of the season.