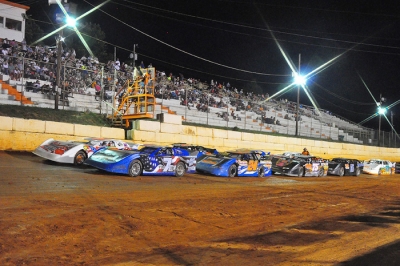 The dirt oval capitalizes on race fans from 50 states and from several foreign countries visiting east Tennessee for NASCAR racing at nearby Bristol Motor Speedway. With Volunteer Speedway hosting big-purse special events midweek during Bristol’s race week, many out-of-state fans make the short drive down Interstate 81 to take in a night of exciting dirt racing on the high banks at The Gap.

Over the years, NASCAR drivers Bill Elliott, Ryan Newman, Clint Bowyer, Ken Schrader, along with brothers Austin and Ty Dillon (grandsons of Richard Childress) have competed in the Scorcher. This year, another of NASCAR's up-and-coming talents, Trevor Bayne of Knoxville, winner of the 2011 Daytona 500 driving for the legendary Wood Brothers Racing team, is set to make his Super Late Model debut.

Adult grandstand admission is $25. Children 10-15 are $10 and kids 9-and-under are free. All seating is general admission. Pit passes and backside tier-parking $35 is regardless of age.

The Lucas Oil Late Model Dirt Series weekend takes a break on Friday before continuing Saturday at Lawrenceburg (Ind.) Speedway, where four series races have had no repeat winners. Pit gates open at 3 p.m. followed by the grandstand gate at 5 p.m. Hot laps begin at 6 p.m. and racing at 7. Adult admission is $25 with children 7-12 admitted for $7. Kids 6-and-under are free. Pit passes are $35 for all ages. — Robert Walden

Whom do fans and racers have to thank for bringing a World of Outlaws Late Model Series event to Winchester Speedway on Saturday? Just look at the name of the $10,000-to-win race.

The barnstorming WoO stars and a host of regional and local standouts will compete for glory in the Ernie D’s & Gunter’s Honey 50, a race sponsored by two of dirt Late Model racing’s biggest benefactors: Winchester Speedway owner Greg Gunter and Ernie Davis, a longtime car owner and sponsor (as well as a former driver) affectionately known as the Junk Man.

It’s successful, race-loving businessmen like Gunter, 65, of Berryville, Va., and Davis, 62, of Martinsburg, W.Va., who help keep the full-fender class rolling along in their home Mid-Atlantic region.

“Greg and Ernie are so much alike — they give back to the sport,” said two-time WoO champion Josh Richards, who plans to take advantage of a break in his NASCAR Nationwide Series schedule to enter Saturday night’s program at the third-mile oval. “Everybody’s not in the situation where they can do that, but being that they are, and that they care enough to give back, shows what kind of people they are and shows how much they care about the sport.”

The owner and operator of Gunter’s Honey in his hometown of Berryville since 1989, Gunter has been involved with local racing as a driver (he still periodically competes in the four-cylinder division), car owner (his 2012 effort with D.J. Myers of Greencastle, Pa., marks his 18th year fielding a Dirt Late Model) and sponsor for decades. He entered racetrack promotion in 2007 when he leased Potomac Speedway in Budds Creek, Md. — he holds the lease there through 2018 and has an option to extend it another 20 years — and stepped up his involvement in 2010 by purchasing Winchester Speedway.

Gunter has transformed Winchester during his three short years at the track’s helm. He’s not only made significant improvements — new additions include concrete walls (inside and outside), Musco lighting, ticket booths and the public address system, plus an update of the concession stands and a resurfacing of the high-banked track — but also established the speedway as a regular host of special dirt Late Model events like Saturday’s WoO spectacular.

While Richards plans to drive his father Mark’s familiar Rocket Chassis house car No. 1 on Saturday night, all of his previous appearances at the track have come behind the wheel of Davis’s No. 25. Since 2007 Richards has made most of his non-WoO starts in equipment owned by Davis, making him intimately aware of Davis’s support for local racing.

“Ernie is awesome,” said Richards, who departed the WoO as a regular in April to pursue his NASCAR dreams on the Nationwide Series. “Obviously he’s been a car owner for me for quite a few years now, and I couldn’t ask for a better relationship between Ernie, Connie (Davis’s wife) and Keya (Davis’s daughter) and myself personally. They’re great friends of mine and I feel like they’re part of our family now.

“They’re die-hard race fans and racers, they’ve always had really good cars over the years and they’ve always given back to dirt Late Model racing,” Richards continued. “They’ve done a lot of things behind the scenes just to help the racers in different situations. Ernie’s always putting up money to keep all the racers going, and that shows how much him and his family care about the sport, and how much it means to them.

“You couldn’t ask for better people, and everything they’ve given back is very well appreciated.”

Winchester general manager Denise Hollidge has similar praise for Davis, who maintains deep roots at Winchester Speedway. As a driver he won dozens of features and the 1992 Dirt Late Model championship there (he stopped racing after suffering a back injury in a 2000 crash at Maryland’s Hagerstown Speedway and transitioned to his current role as a car owner), and in the mid-1980s he even briefly co-owned the track with Doug Timmons.

“I don’t think words can describe what Ernie has done for the sport of dirt track racing,” Hollidge said. “Ernie has given so much over the years, not only to many speedways but to many drivers along the way. Ernie has a heart of gold and so much passion when it comes to racing. It’s hard to believe that one man could do this.

“Ernie always has that smile and a ‘Hello’ for everyone around. He’s a great man, and it’s a shame auto racing doesn’t have more Ernie Davises.”

Davis, who sold his namesake Ernie’s Salvage Yard business several years ago but still oversees several other business interests, will co-sponsor Saturday’s WoO race and field a car in the action. Former WoO Rookie of the Year Austin Hubbard of Seaford, Del., is scheduled to steer Davis’s No. 25 at Winchester.

Darrell Lanigan of Union, Ky., will lead the WoO charge to Winchester. The points leader and new single-season victory record holder (13 to date) enters the event tied with Richards for the top spot on the national tour’s alltime win list, at 39.

General admission for Saturday’s program, which also includes pure stocks and U-cars, is $25 for adults and $5 for kids 6-12. Pit passes are $40. Gates will open at 3 p.m. with hot laps scheduled to begin at 6 p.m. and time trials to follow. — Kevin Kovac

After two attempts to race at 311 Motor Speedway were halted, the Ultimate Super Late Model Series tackles the half-mile oval near Madison, N.C., on Saturday. The second annual Terry Wiles and Steve Setzer Memorial pays $4,000-to-win at the track now promoted by Steve Stultz. "The track has been in excellent shape,” Stultz said. "My brother Blake has done a great job with preparing it every week and we are going to work hard again this week to give these guys a great track to race on. We just need Mother Nature to be kind to us now and we will have ourselves a great race.” .... Paducah (Ky.) International Raceway’s USA World 50 on Friday serves as the weekend opener for the MARS DIRTcar Series, which also races at Federated Auto Parts Raceway at I-55 in Pevely, Mo., on Saturday. Both events pay $5,000-to-win. ... Eastside Speedway in Waynesboro, Va., makes up a rainout out Three State Flyers circuit event on Friday, paying $3,500-to-win.