Hilltop title goes down to wire (and then some) 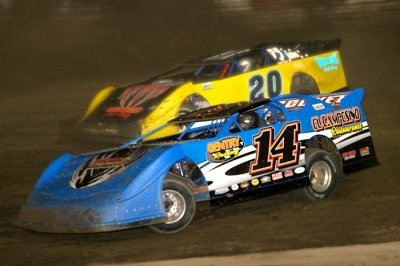 The battle for Hilltop Speedway’s Super Late Model season championship was so close that even transponder scoring had trouble determining the winner.

With the track’s recently installed transponder scoring system reading that Duncan crossed the line .0004 seconds ahead of Gentry, the track’s announcer initially called out that Duncan had finished third to claim the title. But after a brief delay, the order was reversed in Gentry’s favor when track officials who had a view of the finish agreed that he had crossed the line first.

“It was all pretty nerve-wracking,” said the 33-year-old Gentry, who earned his first-ever championship at Hilltop to go along with his previous title at Lakeville (Ohio) Speedway. “When it was over and we both got out of the cars, we were looking at each other and looking at the officials. They never would say who won. They finally said I won the thing and it was just a huge relieve.”

Gentry’s final-lap pass for the championship came in improbable fashion. He entered the race three points behind Duncan, a former track champion at the 3/8-mile oval. With a four-point gap between each finishing position, whoever finished ahead on the track in the finale would win the title.

The two points contenders started side-by-side in the third row, with Duncan taking the upper hand by climbing to second early in the event while Gentry struggled to make up ground. Duncan appeared to be headed for another championship until his car suffered front suspension damage when he hit an infield tire barrier while looking under eventual race winner George Lee of Loudonville, Ohio, for the lead.

The damage caused Duncan to fade and gave Gentry, who was nursing a damaged car of his own, renewed hope. Gentry ran down Duncan in the closing laps of the race before making his thrilling final-corner pass with a low-side move to overtake Duncan.

“It was a heck of a race,” said Gentry, who drives a family-owned Rocket Chassis with sponsorship from El Campesino Resturate and Sound FX DJ Services. “I was really struggling with the handling, but once he hit the tire I knew I had a chance. I was just waiting for a slipup. When the car ahead of me got around him, that opened the door, and I knew I could probably get him.

“We both had battered cars and was doing all we could. I actually thought I had him, but he had that run coming off the top. When we crossed that finish line it was hard to tell.”

Lucky for Gentry, track promoter Jesse Wardell and his race officials were certain that Gentry was indeed ahead of Duncan at the line.

The discrepancy with the transponder scoring, Wardell said, was likely because the track’s scoring system uses two separate scoring loops in order to accommodate two separate styles of transponders that drivers may use. He added that readings could be off by up to 2 feet when drivers using different-type transponders cross the line in a photo finish.

“We made the decision because it was unanimous from the flagman, scoring tower and our officials in the infield. And with us only using transponders for six weeks, I’m not going to base (the championship) on something that was visually obvious,” Wardhall said. “We’re investigating some of the issues with the way the scoring loops were installed so we don’t have anymore issues. But for now we have to go with what we all saw.”

While disappointed in the outcome, Duncan took the defeat gracefully.

“To me, hey it’s racing. They made the call, and that’s the way it is,” said Duncan, who fields a Hall’s Auto Sales-sponsored MasterSbilt Race Car for car owner Leroy Hall. “At the time, I was aggravated cause we lost it and nobody seemed like they knew what was going on. But it worked out like it did, so we’ll move on.

“J.R.’s a great guy and he deserves it. I know people in the stands were excited about it. To end the way it did, people were on their feet. Of course, I wanted to win the thing, but putting on a show for the fans, that’s what it’s all about.”

Duncan admitted losing the championship was probably his own doing. Running second early, Duncan probably could have just settled in and taken it easy to secure the title. But after going winless so far on the season, he instead went for the race win.

“I wanted that win real bad,” Duncan said. “We hadn’t won all year, and George has been the one to beat there. I was going for the win, racing really hard for the win early and just caught the uke tire. That was what cost me right there.”

Gentry was happy to come away with the championship, but was just as excited to come out on top of the thrilling finish that featured clean racing between the two drivers.

“Me and Charlie, we’ve been racing each other for years,” Gentry said. “We always race each other clean, and that’s what it came down to at the end of the race. Either one of us could have took it from each other just with a door slam. But it was clean racing, and a great race to watch for the fans. I was just glad to be a part of that.”